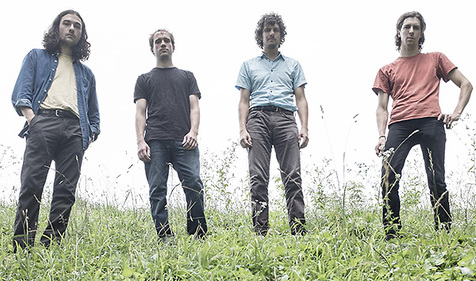 Everyman! Jump in the digi-queue if you dare - an eruption of primal strength and fortitude, rife with metalloid guitar glitches, barreling drum-and-bass and avalanges of strangulated bluster is available to stream all over your freakin' headz! Dope Body's latest/greatest Kunk is currently streaming in it's entirety on Noisey!

Oh, no you HAVEN'T not heard of Dope Body! They've been bustin' since 2008, evolving from their original form as an experiment in musical instincts and shattering the molds of what it means to be a rock band in the 21st century.
Kunk fuses the strengths of their previous three albums (Nupping, Natural History and LIFER) with a melding of crunch and grind, funk and flutter. Mindlessly leaning into the future with the intensity of a caged animal, the jams of Kunk pound and float and roll, with riffs are aplenty and rage palpable, refracted from the eye of the storm. Together, Dope Body is a spasm of styles and directions; showering sparks from a blended thickness.

It's not all gut-busting propulsions, however. Kunk brings darkly melodic rhythm constuction to the forefront, the sounds of post-punk preoccupation festering in their minds of the young. Expanding the bounds of their crazed reputation, mucky, feedback-laden zaps of buzz and noise are crammed into the songs, giving Kunk it's uniquely textured sound. And now you are chomping on the bit of this descripto, huh? No need to continue to foam at the mouth - get Kunked, on Noisey!

Dope Body hit up NY & Baltimore then it's on to Europe!