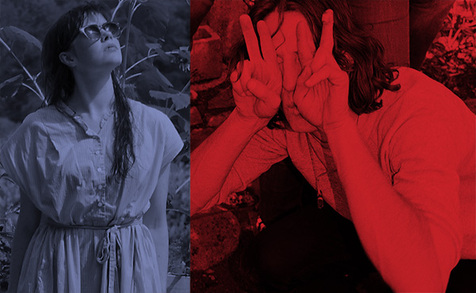 You know what the MAN said about peace, right? A journey of a thousand miles, taken one step at a time? Eff dat - nah, gimme danger, handful of napalm and PEACERS! America's new band is ripe and familiar with faces! San Francisco pop/fuzz/garage/punk/insert another bs genre here wunderkid Mike Donovan is back in business - the business of creating incredible tunes to get high to, to thrash and wonk along to, that is - with Peacers. Their debut album, which dropped in July, is a sweet as a slice of apple pie laced with fog and arsenic! Until now, Peacers have been playing local spots to crowds around the bay, but come the fall, they are taking the show on the road, to "Everytown, USA"! So yeah, this news is VERY exciting in its own right, but how to make it even more sublime (the feeling, not the band)? How about some Elisa in the mix! On ALL the dates! Co-headlining! Oh YEAH.

Elisa Ambrogio exists in the world of no gods and no masters - she is unto her like she is to you, one of a kind. Her stunning solo debut, The Immoralist, gots glossy melodies, pop percussion shining through an elaborate shamble, and the kind of lyrical introspection that would bounce the most enlightened monk into deep meditation! Especially if that monk liked to reflect upon the feels of disaffected teens and their weird OCD fantasties! A triumphant slice of contempo-pop perfection, The Immoralist is a side of Ambrogio that's been spine-tinglingly apparent since her Magik Markers began their wail, yet hasn't fully come to focus til now. The Immoralist marks a new refinement and metamorphosis in Elisa's musical voyage - more catharsis than melodics - and her live show follows have followed in fuzzy suit! Not one to ever do anything 'by the book', Elisa's got some dates coming up in September as an improvisational duo with her partner in life/crime/music Ben Chasny! Because who wants things to be conservative or predictable? No one, and not her, and not us and not you, that's who!

With that, keep your head held high, your middle finger higher and catch Peacers & Elisa Ambrogio take over America one underbelly at a time come October!