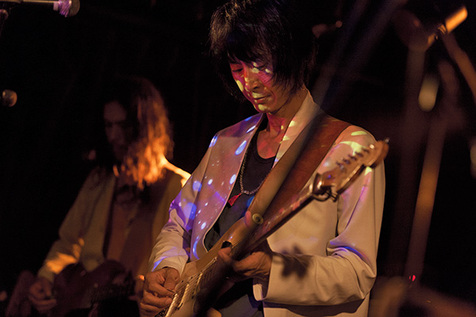 PAINT WITH ALL THE COLORS OF THE "ANCIENT WIND"

Hark The Silence is more than just an album by Japan's premiere pschedelic classic rock band, The Silence (led by Masaki Batoh), it's a transcendent performance that travels enormous distances and captures live energies in astonishing studio sounds. Recorded entirely on 24-track analogue tape, Hark The Silence has loads of textured sounds, both heavy and light, that ascend into space and explore new possibilities for the band.

Everything in the universe accessible to The Silence may be found in the "Ancient Wind" trilogy that fills side one of Hark The Silence. From the depths of space, we bring you "Ancient Wind Part 2", personally curated by Batoh to reveal all that The Silence is capable of. Rattles of a rooted, deep bassline appear to bubble at the surface like an eternal volcanic eruption. The now-sensuous groove explodes into a furious Bo-Diddley beat, a chant replete with acid-rock guitar solos, an encompassing saxophone testament and an echo-unit driven drum breakdown. As the swirling mass subsides, a few rusty blue notes from an acoustic guitar fade out to the encroaching Silence.

THE SILENCE, LIVE IN JAPAN: