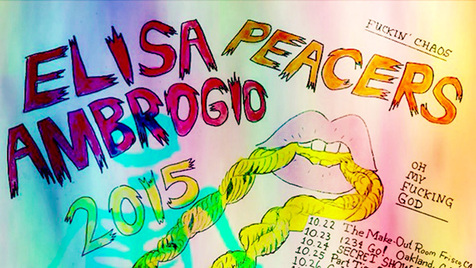 ELISA BRINGS PEACERS TO THE NATION!

....or Peacers brings Elisa Ambrogio - it's one way or the other! They're both in the same boat. And that boat is traveling down the highway at -just above average speed, but it's picking up speed too! Or maybe it's a train! So that accounts for the sound in your mind - hear it? That's the sound of the Peacers train coming CLOSER to you! That's because, this Friday, Peacers and Elisa Ambrogio are FINALLY hitting the road together, renewing their old Sic-Alps-Magik Markers acquaintances and bringing their combined good times, bonafide jammers and whatever other trips and tropes these two can upend all across America! Stopping everywhere from tiny villages to the streets of bustling maxi-urbanopolises, the combination of Elisa A's bewitching sorcery and Mike D's be-listering explosions of acid-pop noises promises to be so FAR OUT (but danceable, and also wistfully sorrowful) that  you'll need a gosh-danged escalator to get back to your mind again.

This standard of a co-headlining tour is so rare and extraordinary, we'd bet our bottom dollar that these shows will be the highlight of 2015- pshaw!- though it's early, more like the century! Get hyped and watch not one, but TWO tour teasers BELOW!