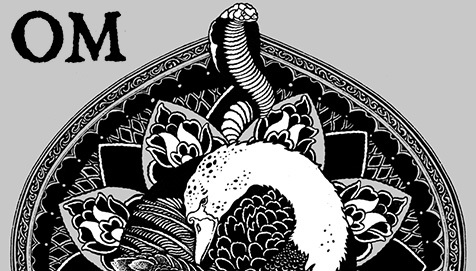 The trio of Al Cisneros, Emil Amos, and Robert Aiki Aubrey Lowe maintain a singularity of purpose that is the core of all OM records and performances, but no single reason can account for the comprehensive nature of their evolution. Where God is Good was the first step in a more ornate and sophisticated direction for OM, Advaitic Songs achieved a level of composition that would've been impossible to foresee. The release of their subsequent dubplates further enlightened all who listened (and all should be listening!), going deeper, expanding wider. What's next for the recorded version of OM? Only the vibrating sands of time will tell; in the meantime, a band that has continually followed its own course, and stood alone in its sound and approach, brings their focused, progressive, and deep spiritual experience to the stage once more in 2015. Dig it - OM's European tour begins in just over two weeks!