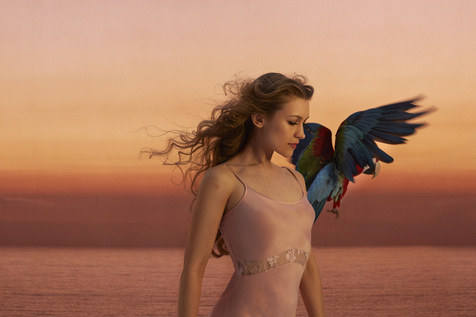 With greater velocity than a meteorite-straddlin' Kris Kringle, Joanna Newsom keeps dropping gifts on a grateful world-pop! While she's in the midst of her first USA tour in four years, more Newsom tour dates have blossomed forth from Mother Earth's nurturing bosom. They land our lady right back where the Divers campaign began - in Europe! It's all part of the international Divers experience, people. Following the years-long buildup to the album release, we've felt your collective sigh of relief and squeal of enjoyment - and now that we're stocked high to the ceiling with care, for us, it's all about sneaking a look at your faces within the acoustically reverberant walls of these happening venues all around the world! Accompanied by a band of cohorts old and new, sounding fuller and further-reaching than ever, Joanna slaps that harp and the piano with a dexterous intensity unparalleled in today's music-sphere.

Reports from the road reveal audiences have been left gasping for air, enthralled by every note - and our reporters don't lie (or stop breathing)! Tis the season to join together and rejoice at whichever Joanna Newsom show is happening nearest you, since the likelihood of one of them actually hitting close to your residence just increased expo-conti-nental-icous-ly! DIG the newly confirmed dates below in bold, oh and btw, American TV viewers get to experience Newsom short-hand tonight, as the tour stops by The Late Show with Stephen Colbert! Tune in after your local news for Newsom!