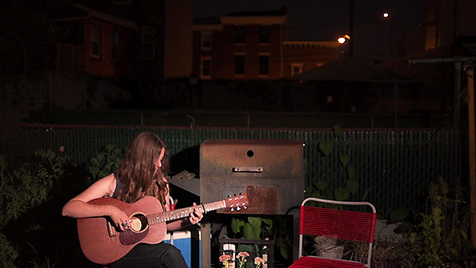 LOSE YOURSELF IN THIS NEW MEG BAIRD VIDEO!

It's been several months and like, two seasons on earth (if you just count our hemisphere....otherwise, whew!) since Meg Baird's Don't Weigh Down The Light release back in June, which of course is at least FOREVER in internet time, right? Somehow her spellbinding voice and brooding song style lives on. Like Meg's previous albums, the heart of Don't Weigh Down the Light is her lyrical, precise ﬁngerstyle guitar work and a voice that moves from soaring and tender to icy and unforgiving, with the album production following her in deep, dreamy tilt. The title track is a highlight of Meg's songwriting strength - and who cares if it's six months later? Let's go video!

The "Don't Weigh Down The Light" mini-film (cause it's THAT classy), is an elegant portrait of time and place directed by Naomi Yang. Filmed in and around the Philadelphia neighborhood of Fishtown, (departed last year for fresh (and 'spenive!) pastures in SF), "Don't Weigh Down The Light" chronicles and reflects rapid development in community and diacritic spirit. It's also a loving embrace and a reverent salutation to memories and experiences of yesteryear. Join Meg on her journey that traverses longing, contentment and nostalgia via the video for "Don't Weigh Down The Light" (which first premiered earlier today on NPR's All Songs TV) and at the dates below!