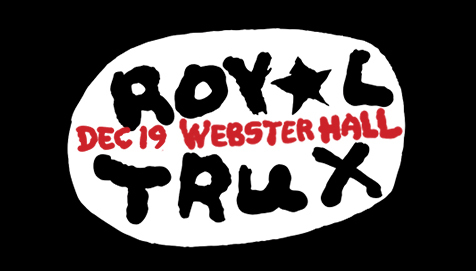 DECK THE HALL WITH ROYAL TRUX

They said this could never happen; they said it never would, goddamn! But they are Royal Trux - they do what they want, see? Neil Hagerty and Jennifer Herrema, the most notorious and confounding duos in rock and roll, a group that leaves you excited, inspired and bewildered-all within the same song, were GONE FOREVER - recoiled back into whatever radical xanadu they emerged from, into whatever fever dream they'd inhabited. The future was cancelled. They promised!

A decade-and-a-half since their supposed demise, Royal Trux made their grand re-entrance this past summer at Beserktown Festival and offered up the ripest, freakiest, groove-jam session of all time! Neil Hagerty's and Jennifer Herrema's slithering guitar pyrotechnics and dynamic howls easily bore into our ears live like they'd never left (cause they hadn't), illuminating a gateway to the fourth dimension of pure, psychic satisfaction. This moment of rock n' roll history seemed fleeting, until it wasn't! In typical Trux fashion (one thousand steps ahead) Jennifer and Neil are 24 hours away from taking the stage yet again in 2015, in Manhattan's Webster Hall!

That's right; Royal Trux bring some adventure back to a city in desperate need when they do it up live, tomorrow, December 19th!  Consider it an early Christmas gift or just another middle finger to the notion of "no more live performances"; whichever way you want it, grab a scant remaining ticket if you haven't already - who the fuck knows what's in store for the future?!  This is Royal Trux!