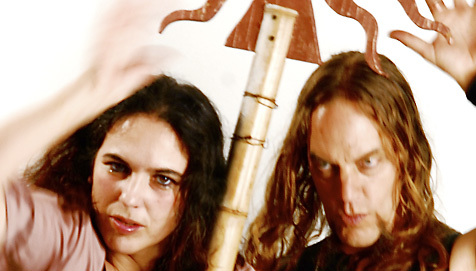 A COUNTRY HOUSE, COURTESY OF FAUN FABLES, AWAITS YOU

It's been six years since Faun Fables gathered together a fresh new musical offering from their world to ours-universal opinion concludes, that's way too long! Faun awaken; we want a new Faun song and we want it now!! Over the passing of those six years, instant gratification has become norm(core) in everyone's lives; in honor of that, Faun Fables bestow upon you a striking, brand new song off their forthcoming album, Born Of The Sun: they call it, "Country House Waits" but the wait is over - you shall listen to it now!

Anyone who has spent time in the thrall of Faun Fables' bewitching sound knows that the mythic shadows of home and hearth, friends and family, have infused all of their expressions. The palette of Faun Fables has grown plentifully in a rich and colorful succession of songs, sounds and visions. "Country House Waits" is no different. "Country House Waits" is anthemic, with Dawn McCarthy's siren vocals acting as a call to arms for a melody. The steady drum beat and Nils Frykdahl's staunch guitar thrusts the Faun's candlelit world into the bright moments of the present. Their contrast of restraint and bellowing wonder is both striking and arresting, so sprightly follow Faun Fables back to the land and listen to "Country House Waits," and catch them on tour in Europe starting this week!

Join the Fauns on their May Euro Trip in these Select Countries!