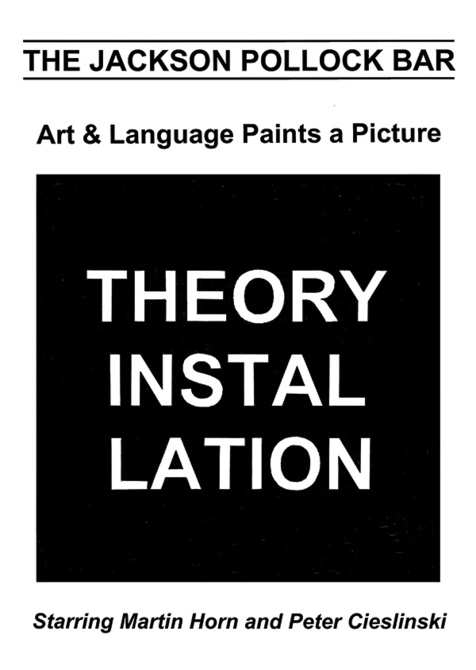 Soccer Club Club is proud to present selected works from two different periods of Art + Language's illustrious visual career. For one week only, multi-media works will be displayed for the first time in Chicago.

Please join us for the opening on Thursday, September 15th at 7PM! Complimentary drinks will be provided by Illuminated Brew Works and records will be spun by the Drag City DJs!

The actors of the Jackson Pollock Bar perform a script written by Art & Language in which they pretend to be Art & Language learning to sing a number of songs from an LP by Art & Language and The Red Krayola called 'Sighs Trapped by Liars' (Drag City Records). In fact, they are lip-synching to a prepared sound track that includes all their speech as well as their singing. The performance was at ZKM Karlsruhe, March 2nd, 2008.

'Art & Language paints a Picture' is the product of a particular moment in the early 1980s and it relates to a specific body of work from that period: a series of paintings of the Artists' Studio. The text was originally written as a kind of drama - which is to say that the dramatic form was used as a mode of representation of Art & Language's idiomatic discourse. But there was no intention or expectation that the text would be performed. And it goes without saying that there was no conception that anyone might go so far as to carry out the stage directions, let alone do so while miming the words in a language foreign not only to the original text but also to the principal actors themselves, for Horn and Cieslinski are both German. Yet this is the project which the Jackson Pollock Bar have undertaken: to mime the text in English while fulfilling the practical instructions which the text contains: to be painting actors, to act painting, not under any immediately familiar guise but under conditions of bathos and desperation.