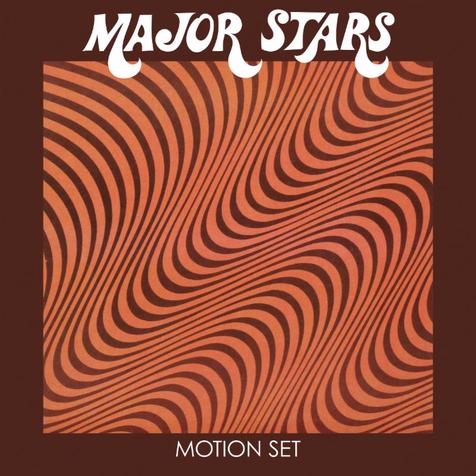 TURN IT UP TO 11, MAJOR STARS ARE BACK IN MOTION!

If it seems brighter and a bit more deafening in the world today, congratulations! You're not dead (yet) and some of your senses are still working. In fact, you might just be perceiving that there's a new Major Star in the sky - one so formidable it's already been named, and you haven't even heard of it until now!

Motion Set is the 9th Major Stars LP and their first on Drag City since 2010's Return to Form, with Decibels of Gratitude appearing in 2012. This has left Starsheads around the world high and decidedly dry; for what reason a four-year gap, they've cried, instead of the rather more ideal two-to-three? Fortunately Major Stars don't sell their process until it's fully melded. C'mon, Wayne Rogers is no Johnny-come-lately to the scene of psychedelic guitar rock. He and Kate Biggar have been crossing axes to head-scrambling effect since the halcyon days of Crystallized Movements of the 80s. As the years have passed, the band has evolved; the Biggar-Rogers guitar duo has become a guitar trio, with original bassist Tom Leonard contributing to the murder of decibels. Vocally as well, Wayne's lead vox have given way to a string of she-singers who have brought new dimensions to the Major Stars' sound.

And thus, four years in the making - Motion Set. Every Major Stars record responds in one way or another to the one before, and to that end, the first taste of Motion Set is a full throttle shredder! The pulsing energy of lead single, "For Today," sears through your eardrums with shocks of potent vitality and electrifying spirit. You'll be playing air guitar for days! In a band built to achieve moments of six-string nirvana, vocalist Hayley Thompson-King provides a sufficiently versatile presence with sirenesque flights, a reedy, Nico-like introspection and gritty, pugnacious flourishes to match the full complement of riffs being flung about.

Major Stars have been capturing and distilling lightning into bottles for a couple of decades, with each record reaching beyond what they know and delighting in what feels good to locate their desire for exploration, obliteration and rock in the present moment. Motion Set nullifies the past while standing on its vanishing shoulders, reaching ever beyond, and it's coming for you on November 11th!