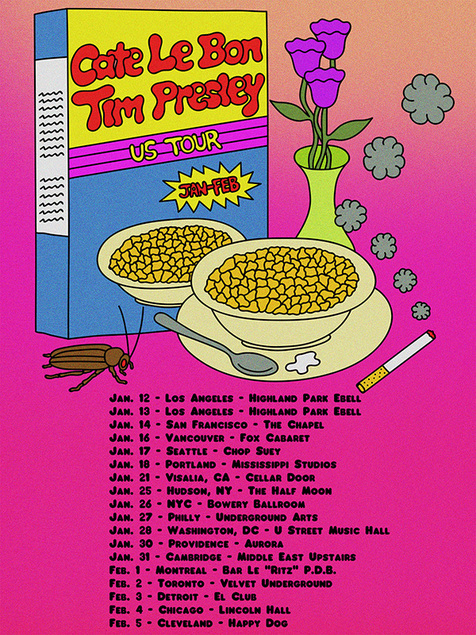 IN THE BLINK OF AN EYE TIM PRESLEY DROPS A VIDEO AND A TOUR!

Wake up! 2017 is coming - and you're behind already. The New Year promises great awake-dreams right out the gate; witness The Tim and Cate Show, in 19 cities spread across our brave new country! Yes. Following their respective 2016 solo records (The WiNK and Crab Day - respectively!), Cate Le Bon and Tim Presley announce a co-headlining tour to bring their many great solo songs to life in a social eye. And speaking of to life (and to eye):

The video for "Long Bow", directed by Guy Kozak, makes flesh and public a highlight of Tim Presley's just-released The WiNK, with a fun and freaky warp-time scenario. Here, the burnt-eye struggles scribbled within the song ("if you can't sleep/then how will you dream....now you peep the streets/because your bed is on fire") are mouthed by seniors in the park, with the agony and ecstasy of their yesteryear now but a gentle recollection recalled with deft rock and roll muscle memory. Who even cares if there's a scamp hidden in the brush out there, willing to hack their song and call it back for re-grooving...let it all come back to life!

The WiNK is out now, on LP/CD/CS - and Tim Presley will be in Europe in November and the US (with Cate Le Bon!) in January!

16- Nov at De School in  Amsterdam, Netherlands
17-Nov at Madame Moustache in Brussels, Belgium
18-Nov at Espace B in Paris, France
19-Nov at The Lexington in London, United Kingdom

12-Jan in Los Angeles at Highland Park Ebell*
13-Jan in Los Angeles at Highland Park Ebell^
14-Jan in San Francisco at The Chapel
16-Jan in Vancouver at Fox Cabaret
17-Jan in Seattle at Chop Suey
18-Jan in Portland at Mississippi Studios
21-Jan in Visalia at Cellar Door
25-Jan in Hudson, NY at The Half Moon
26-Jan in New York City at Bowery Ballroom
27-Jan in Philadelphia at Black Box in Underground Arts
28-Jan in Washington, DC at U Street Music Hall
30-Jan in Providence at Aurora
31-Jan in Cambridge at Middle East Upstairs
1-Feb in Montreal at Bar Le "Ritz" P.D.B.
2-Feb in Toronto at Velvet Underground
3-Feb in Detroit at El Club
4-Feb in Chicago at Lincoln Hall
5-Feb in Cleveland at Happy Dog