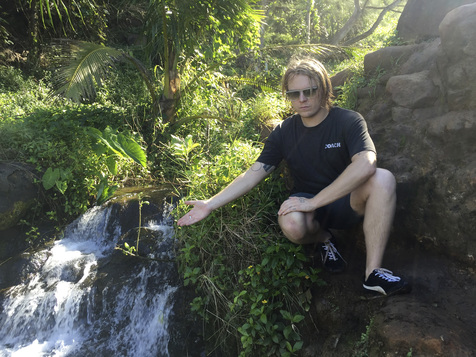 BREAK A GUITAR WITH TY

Ty Segall's swiftly oncoming (Jan 27th, baby!) self-titled album is his ninth solo release since 2008, a span of records that have embodied an arcing swath of up-and-upper rock and roll music for the people. What people? They know who they are. They're finding out all the time. They like candy-striped and scorched-earth sounds alike, and Ty keeps throwing down both and more in spades! "Break a Guitar" is the second drop from his new album, a 180-degree spin from the acoustic pastoral of the previously-leaked "Orange Color Queen", and a reminder that beyond all the tender beauty that he's capable of, the rifftasm of Ty's music vision is what drives him ever forward in shows everywhere and in the minds of listeners who dig the sounds. With a week to go before the album hits, "Break a Guitar" aims to shatter the fugue-state you're been wandering through and invite you back into the real life that's coming! You are needed here, and with as few illusions as possible. Ty Segall will make that happen!

Ty (guitar, vocals) and his magick band comprised of Emmett Kelly (guitar, vocals), Mikal Cronin (bass, vocals), Charles Moothart (drums) and Ben Boye (keyboards) will tour throughout the year, playing multiple nights in various towns and one-offs in others. All dates are below!

Thu. May 11 – Indianapolis, IN @ Irving Theater