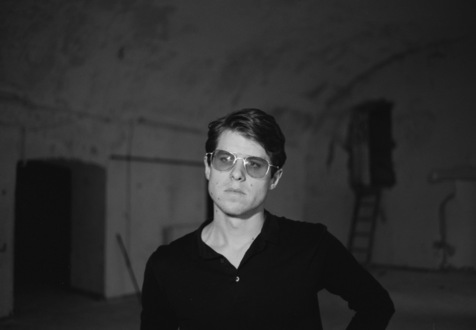 CORY HANSON LIMBO'S HIS WAY AROUND THE PACIFIC NORTHWEST

Oh my stars! And pink hearts and yellow moons....if you haven't read your tea leaves lately, then look to the skies. There's a full moon coming on January 27th, and a quarter moon one week later, on February 3rd. But the moon west coasters should be looking for these next couple of weeks is Cory Hanson's "Flu Moon", delivered live at clubs and on the radio in select locations from Seattle, Vancouver and Portland to San Francisco! In case you've forgotten, Cory stepped out from behind the frenetic time-and-space blasts of Wand to deliver his first solo record, the string-and-space laden bitter-suite The Unborn Capitalist From Limbo, back in November!

Since booking a tour with string trio and rhythm takes a bit of doing, Cory wasn't able to get outside of his home base in LA right away - but lo and behold, a tour has come, and with full band. And not a moment too soon - so, citizens of Seattle, Portland and SF, before setting the fire to the streets of the FORMERLY United States of America, soothe the savage beasts ravaging inside your brain by listening to songs of disaffection that could just be echoing from your very own mind! And citizens of Berkeley and our dear brothers and sisters in Vancouver, tune into KALX and CITR when Cory's in town, and perhaps you will hear the sounds of The Unborn Captialist live over the airwaves.