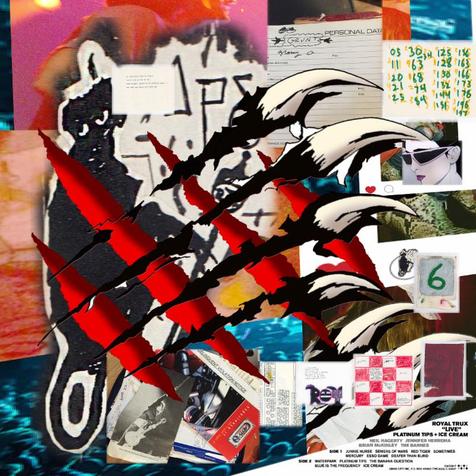 Platinum Tips and Ice Cream (scenes from the water park) is new from Royal Trux. The songs were written over a span of time as wide as eagle's wings - but the recordings are new, live, unrehearsed and were presented in real time to a few thousand people in California and NYC. Performance art? Yes! But only because, unlike so many other aural "content providers," Neil Hagerty and Jennifer Herrema are true artists writing their own futures into the present. This was, and will always be, Royal Trux.

It's been a minute since Royal Trux went about making a record in 1-2 days, but they got that system on lock, and once again we see them setting parameters and adhering to them for max impact. Platinum Tips and Ice Cream was also made in two days...one in Cali and one in NYC, during the onset of their return to live performances. The recordings bring the actual experience and the rawness that could be felt and heard LIVE, to a finished form. Platinum Tips and Ice Cream conjure the early feral spirit of the band devouring the sophisticated sound of the later years and coughing up a motherfucking hairball of sound!

Royal Trux has always played with the idea of "expectation" like it was a new toy at Christmas, and year in and year out wiped it out like the face of an old teddy bear. For them, a touchdown was best achieved in reverse, via counter-intelligent means. It is fucking INSANE to hear how much that is still the case.  As the rhythm punches, the scabrous tone of Jennifer's vox is matched only by Neil's harsh, stinging guitar volleys - and the mad filters passing through the Bass Station. A personal playlist of hits rolls out - and not all rockers, but some slower jams and moments of deep heavy. But no "Back to School"?!? Well, that's why there are more Trux shows coming up. And like they say, every night is gonna be a great night.

Wrapped up in a Truxian collage scrapping together the crazy quilt of time in their Royal-iverse, which in the light of this reunion is now folding back over itself, Platinum Tips & Ice Cream collects 12 Royal Trux non-sequiturs in tribute not only to the past but the unending nature of the future. Mark your calendars for June 16th, 2017 for when this drops...a date you never thought was possible!