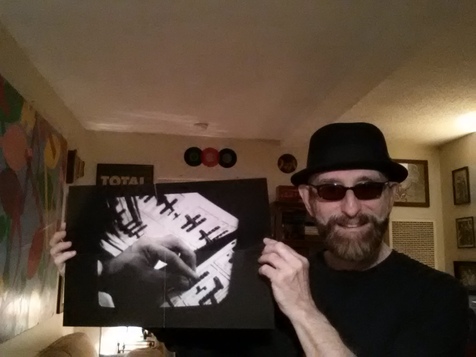 IN CONVERSATION: BRIAN WEITZ AND RON CURTISS OF THE BOFFOMUNDO SHOW

Fumio Miyashita’s long awaited live sets from the California based Boffomundo Show are finally available on vinyl this Friday! Videos from the taped live sets, recorded in 1979 and 1980 respectively, have been circulating on Youtube for years and caught the eye of Brian Weitz (aka Geologist, from the influential trio Animal Collective), who helped facilitate getting this incredible music to us so it could be released for the first time on any format! Fittingly, Brian and Ron Curtiss, co-creator of The Boffomundo Show, sat down for an exclusive chat on all things Fumio and we're pleased to share it with you. Fumio Miyashita's Live On The Boffomundo Show is available for order now, or you can grab it on it's grand release date, this Friday, 9/22, at your local record shop!

BW: Hi Ron.  First off, let me say thanks so much for allowing me to do this project and for being so generous with the original tapes and archived notes.

RC: Thanks, Brian, to you and everyone at Drag City for a terrific experience!  The whole project, from beginning to end looks and sounds amazing!  Kudos, my friend!

BW: Before we get to the Fumio performances, can you tell me a little bit of the background of the Boffomundo Show?

RC: My partner, Aaron Weiner and I were friends from high school and both drummers. Aaron still plays professionally. We both loved progressive rock (not "progrock" in those days) and formed a production company.  We managed several Los Angeles bands, but needed a hook, as the record industry in general and progressive rock in particular was in decline. Aaron lived in an area of LA which was among the first to get cable TV, originally intended to increase the TV signal in LA's canyon and mountainous areas. The FCC mandated that every cable system offer a public access channel for the community to do inexpensive television productions for a small fee of $35. They provided two chairs and a plastic plant!  Think 'Wayne's World'!  It was a two-camera setup. All black and white. The equipment donated from local TV stations and was several years old. We took a brief course in production after deciding to do a music show with interviews, record and concert reviews and 'witty repartee". The hit TV show of the day was 'Happy Days' with a slick wisecracking biker called Fonzi. One of his catch phrases was 'correctamundo'. I had been reading the Hollywood Reporter entertainment daily with a headline referring to some film doing 'Boffo Box Office" while listening to Fonzi. Suddenly I blurted out, BOFFOMUNDO! (Big World) and the rest is history.There would be no history, however, without Antony "Tony" Harrington, a classy Brit and music maven who traveled the world as an A&R (Artists and Repertoire) executive with Atlantic Records. He worked with Yes, Genesis, King Crimson and Emerson, Lake & Palmer!  Great gig!  Tony ran an independant record label called 'All Ears Records' specializing in Japanese and European prog bands, particularly The Far East Family Band, already legendary at home and in Europe having worked with Klaus Schulze from Germany's Tangerine Dream. Tony helped create and MC'ed what he called The Manifestival of Progressive Music, featuring Far East Family Band, Chronicle and Sensation's Fix from Italy on May 12, 1979 in Downtown LA.  We approached Tony, introduced ourselves and met at his Sunset Blvd. office soon after. Tony was in his mid-40's, while Aaron and I were 24.  Not quite a father figure, but we respected both him and his accomplishments, while he saw potential in us. We renamed the show, 'The All Ears Boffomundo Show' and were provided with Robert Fripp from King Crimson, Phil Collins (pre-fab) and his fusion group, Brand X; future Asia star and Crimson alumni, John Wetton and of course, Fumio as guests. A dream come true to interview (and sometimes party with) these brilliant musicians.

BW: What else were you doing at the time?  Were you working in music?  Have you worked in music in the 40 years since?

RC: I had been a tour guide at Universal Studios and Aaron had recently graduated from Stanford.  I worked for several record stores (of course!) and landed a job at KM Records in Burbank working for both the matrix and mastering departments in the 1980's.  I also worked many years for Alfred Music, acted in several films and produced a Boffomundo book about Robert Fripp in 2015.  Aaron continued his drumming, opened a real estate company and raised a beautiful family. I uploaded the old shows to YouTube in 2008 and Aaron and I were back in business!

BW: Since I was not part of the first round of correspondence between you and Drag City, can you tell me about being approached about releasing the performances on vinyl?

RC: Last August I was sitting on my couch, when I got a Facebook message spelling the whole thing out. Something like, "Hey Ron, we are big fans of The Boffomundo Show and Fumio Miyashta (The 'Anglo' spelling. Tony thought that having the word 'shit' embedded in his name was no good!) in particular. We want to do a vinyl album of his music. What do you think?" I was positively thrilled to get the offer, thought it was brilliant idea and was dead chuffed that "Geo" from Animal Collective was 'the man with the plan'!

BW: Before being introduced to Fumio by your partner Tony, were you aware of Fumio or the Far East Family Band?  From your perspective, how was Japanese psychedelic and progressive music received in the US by fans of those genres?

RC: I came from a musical family with a tradition of searching for and collecting vinyl. I happened upon Fumio's 'Tenkujin' album in March, 1978 and was very impressed. Progressive rock is native to Europe (especially Britain) and found it's way to Japan and beyond, picking up cultural sounds and landscapes as it progressed. However, outside of hit albums from Yes, Jethro Tull, ELP, Pink Floyd and a few others in the 70's, most American audiences were not nuanced enough to venture beyond Anglo rock, in my opinion.

BW: What are your memories of the two times Fumio performed on Boffomundo?  How did the studio staff react when he showed up with the gear we see in the footage?

RC: We were venturing into unknown territory as Wendy White, the Theta Cable director, told us. Beyond a guitarist or accordion player, music like this with multiple instruments hadn't been tried in a studio the size of a small bedroom. Fumio had many different keyboards (all customized), gongs, incidental percussion, tone generator and a mixing board.  Fumio routed all the sound (including live mics) through a 12" bookshelf speaker.  It was placed on a stool. The tech folks put a microphone in front of the speaker and that was it.  ALL the sound performed was represented in glorious mono!  It was a subtle, extraordinary performance captured for the ages!  The 2nd appearance was a year later. Fumio was accompanied by guitarist Lance Hooks and bassist George Babon, who were both American. As opposed to the ambient/techo stylings of the previous performance, this time a fuller Far East Family Band echoed the "Japan's Answer To Pink Floyd" mantra that Tony promoted them as. Sinewy guitar lines, steady rhythmic bass and further keyboard wizardry from Fumio filled the show with a 1/2 an hour of continuous music. It was a brilliant follow up and we were all very pleased with the performance.

BW:  When we looked into the ownership of these songs, Fumio’s widow told us that no one owned the performances or music within them.  As far as you remember or could tell at the time, were the compositions improvised?  Were there other takes filmed that didn’t make it onto the final edit of the show?

RC: I think the music should be considered Fumio's intellectual property regardless of whether it was published or not.  I noticed some themes from the Tenkujin album, prepared for solo rendition, during his set. Fumio moved effortlessly from instrument to instrument with nary a hesitation, seemingly in a trance while in performance.  For $35 you got 30 minutes, period.  15 minute set up time (we asked and got a little more!)  After the taping, no editing, no nothin'!  The idea that there were no technical issues in either show was a miracle and adds to the mystic and magic of his timeless music.

BW: Can you talk a little bit about what Fumio was like as a person?

RC: Aaron called Fumio a 'gentle soul' and it's spot on.  He and Linda had a beautiful home in LA and were delightful hosts to us.  Fumio's English was limited, so both Linda and Tony made up for what was needed for conversation.  He showed us his new 'Walkman' portable cassette player from Japan and we all thought it was bitchen!  There was certainly an air of peace and serenity that Fumio exuded and it was so evident in his music. He performed for us and then we had a wonderful afternoon.

BW: Was there any reaction from your viewers to the performances around the original air dates?  In the 30 years in between the filming and then you uploading the videos to Youtube, was there ever any mention of them by fans of Fumio or the Far East Family Band, or did it seem they would remain obscurity and only remembered by those directly involved?

RC: Certainly the latter. We had no clue who was watching us and where they were.  No demographics for public access.  While we received a smattering of phone calls in the 2 years we did the original show, it's only been the last 9 years that the shows have gotten the attention, I think, they deserve.  It's folks like you and Drag City, who honor the shows and promises us Boffomundo Boys a mention in the annals of progressive rock history!  We are grateful.

BW: Are you sitting on any other special things in your archives that you hope to bring forward?

RC: Only time will tell!

BW: What’s next for you and Boffomundo?  Were there any dream guests you had hope to have on back then that you never got a chance to?

RC: Aaron and I plus our tech guys, Keith Lewis and Mark Pirro began The New Boffomundo Show last year.  We've done shows with French fusion bassist, Bunny Brunel and U.K. keyboard legend, Brian Auger.  We are still feeling our way through the process and look forward to new shows from now on. Though I've met Chris Squire, Steve Howe and Alan White from Yes, I would have loved to talk with them, as well as Peter Gabriel, Miles Davis, Jon Anderson, Brian Eno, David Bowie, Kate Bush, on and on.  I think The Boffomundo Show was unique in capturing a moment in time for progressive rock, when the memories of the glory years were still fresh in the minds of these amazing musicians and we had the chance to immortalize them