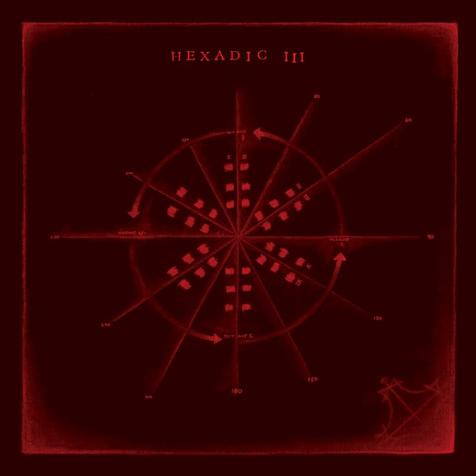 The Hexadic System, created by Six Organs of Admittance's Ben Chasny, is a new wave in combinatorial theory with powerful potentialities for music composition. Over the last three years, Chasny has demonstrated the possibilities of the system with a published book, two albums of Hexadic composition, as well as touring the music and chairing talks on the process and uses of the System around the United States and Great Britain.

This third installment of the Hexadic series conveys a shared mode from a wide span of performers, all of whom have used the System for a means of expression that allows them to access themselves in both new and essential ways, highlighting both commonalities and diversions in their playing - and providing in the process an album of deeply stimulating new music. Curated by Ben Chasny and featuring compositions by Moon Duo, Tashi Dorji, Stephen O'Malley, Richard Youngs, Phil Legard, Jenks Miller (Mount Moriah) and Meg Baird & Charlie Saufley (Heron Oblivion), Hexadic III is suffused with a meditative energy, as their native understandings of how to create transfuse through the System with an invigorating flow.

One of the advantages of the Hexadic System is the provision of a malleable template to interface with the wide array of choices one makes when composing. With this in mind, Hexadic III shouldn't be listened to as a key to understanding how the system works. Instead, one should expect to hear a various artists collection that has an unusual cohesion, resulting from a new line of communication in which all are participating, even when they are using the language directives in different ways. Listen to Jenks Miller's interpretation above and pre-order Hexadic III for February 23!