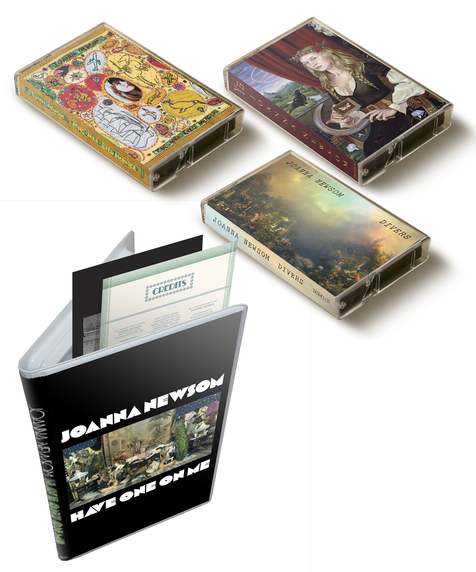 NEW NEWSOM FORMAT HITS THE SPOT, IF WE DO SAY SO!

Where does the time go? It's been 14 years since we got the first Joanna Newsom record out, and since then, there's never not been a time when more copies of that record and her subsequent albums were in heavy sales rotation. So it only makes sense that we should break her music out into one of today's most desirable platforms...wait for it - cassette tapes! Back in 2004, we were certain that that particular format was solidly in the rear-view; the sales ledgers for cassettes of Pavement, Silver Jews and Palace Music were absolutely barren (despite a HEALTHY overstock) for most of the decade before she came on the scene. So, thus impoverished, we put Joanna's records out on LP and CD, and then later, download and, still later, streaming (through only the BEST services, naturally). By the time of Divers, it was clear that the cassette format was back - but was the Venn diagram of Joanna Newsom fans and cassette consumers possessed of a viable area of overlap? Yes! And so we are pleased to bring out the good old Newsom catalog on cassette tape! And none of that porcelain-spool, DMM chrome type of chicanery - just good quality standard tapes for people who want the freedom that only a Walkman can bring! In the case of Have One On Me, it does of course require special packaging to house THREE tapes and photo inserts, so in that sense, you can rest assured that no expense was spared. Welcome in 2018 and the 21st century in general - get your copies of The Milk-Eyed Mender, Ys, and Have One On Me on the (apparently) timeless cassette format, starting today, and extended to whenever the next major cultural-industrial shift in the music industry occurs. That's right - you don't have much time!