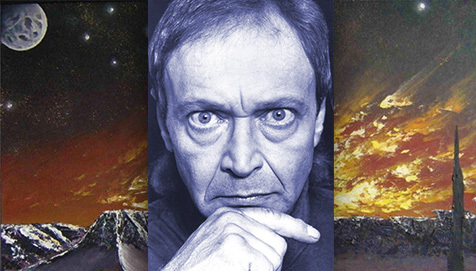 After being obsessed by the 1977 album Here Am I, a copy of which I was lucky enough to stumble upon in a dollar bin in the mid-90s, I spent over 10 years on-and-off trying to track down the artist known as Frederick Michael St. Jude. The album was clearly great—lyrically, vocally, and musically, FM St. Jude was indeed the “walking atomic power plant” that the batty liner notes claimed he was—but the man and his motivations were a total mystery. Eventually, through persistance and the internet, I discovered that he was, in fact, Fred Dengler, and within a few hours I had him on the phone. He was living in a small town in central Florida, digging for fossils and painting. He had an unreleased, futuristic, concept album in the can that he had been tinkering with for a couple of decades. He had written a sci-fi/horror novel, written and starred in plays, acted on “Miami Vice” opposite Sheena Easton, sung for a garage-rock band in the late ‘60s, published an early New Wave music magazine…and was a devoted family man with a wife and daughter. He was both more cordial and more eccentric I ever could’ve imagined. While he kindly and thoroughly answered every one of my questions in a deep and dramatic voice, I felt like I was just scratching the surface of the story of this unheralded Renaissance man. Talking Drag City into reissuing his one and only released album, Here Am I, proved surprisingly easy once they heard it, and despite the challenges of the current marketplace they went ahead and released two more volumes of Fred’s far-out music off of master tapes that were thankfully not lost. Whether by e-mail or telephone call, Fred’s enthusiasm and gratitude every step of the way were boundless. I only met him once, when he showed up at a Neil Hamburger show in Tampa; a visually-imposing older gentleman who spoke candidly and seemed otherworldly. In person or on the phone, he spoke often of God, but not in a way that could be considered in any sense traditional.

During a long car ride on tour with my friend/opener Mike Hickey, in which the subject was lousy, semi-scam documentaries that inexplicably raked in a fortune in Kickstarter contributions, I dared Mike, who was equally smitten by Fred’s music, to make a quality documentary on a ZERO budget. Soon after, Mike headed out to Florida with Craig Irving and they spent a few days with Fred, talking about his life, his recordings, and his philosophy; looking through his art; and digging for fossils in the swamps. We had no idea that Fred was ill and that the footage and resulting film would soon become even more precious. In recent months, Fred continued work on a new album with his long-time collaborator Norman Titcomb, and was VERY excited about the inclusion of a song from his rescued concept album Gang War in the upcoming summer sci-fi movie “Kin”, starring James Franco…a placement which would’ve seemed impossible just a few years ago when Gang War seemed destined to remain unheard and unknown. Fred died on Friday, June 8, 2018, and is survived by his wife Suzanne and daughter Shannon.