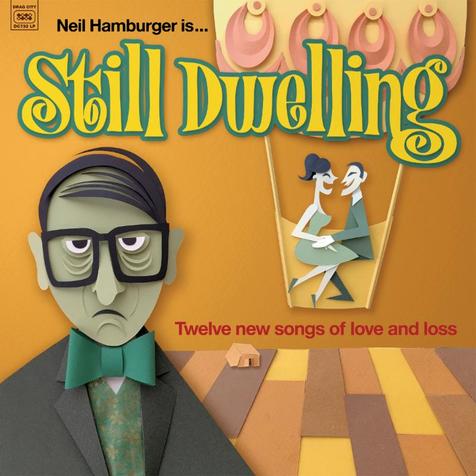 In our time of America's greatest dismay, it takes "America's Funnyman" to show the way back to a little bit of love and a whole lot of classic entertainment. With vocal pipes alight and a full studio orchestra behind him, Neil Hamburger is Still Dwelling - and dare we say, better than ever, as he brings new life to some of the greatest songs of his era.

With Still Dwelling, the Hamburger touch is applied to a veritable potpourri of 20th century songwriters, from Lennon and McCartney to Andrew Lloyd Webber, and from T.S.O.L to Ann and Nancy Wilson - talk about Heart!

This ambitious project began with a handful of popular standards that Neil and his accompanist of choice, Erik Paparozzi, performed regularly on the road. These numbers allowed Neil to sing his truth, relieving the unending pain of all his trials. Erik assumed the production chair, acting as Neil's own Phil Spector, running herd over a latter-day wrecking crew throughout multiple studios in Los Angeles and around the world, getting great performances from the best talent around. Along the way, such star names as John "Rabbit" Bundrick (The Who), Probyn Gregory (Brian Wilson, Beach Boys), Tanya and Petra Haden, Bar McKinnon (Mr. Bungle), Mikael Jorgenson (Wilco), X's D.J. Bonebrake and many more were welcomed to the session. Plus, guest vocals were contributed from scads of friends and family - Neil's entertainment family - including, in one unforgettable passage, virtuoso turns from Jack Black and Mike Patton on the Jesus Christ Superstar hit, "Everything's Alright"!

These days, it's the rare pop album that utilizes the talents of such diverse songwriters - uniting a wide range of styles under Paparozzi's beautifully articulated arrangements, Still Dwelling suggests a new definition of the Great American Songbook era, the pure emotion of such music-making shines through the layers of deep-pile production, a magical example of classical pop studio technique. This music flows through the speakers, from Neil's heart to ours, which is evident on the lead single, "Backwards Traveller" - check it out:

With Still Dwelling, Neil Hamburger faces his audience like never before, with a heart literally filled with love. Listen to "Backwards Traveller" now, watch the album trailer for Still Dwelling, and pre-order your copy for November 16th!