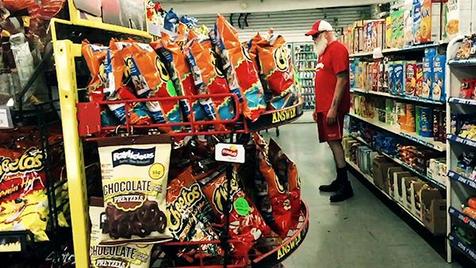 What's that in the chimney? Whoah - its Dead Rider Trio in the house! Their sack is full of new musical gifts, all adorned with the addition of Mr. Paul Williams on vocals. This mysterious figure works in the film industry, was a once the manager of Crispin Glover - and he sounds like it!  His barbed dictation foregrounds the raucous jams that the DRT- Todd Rittman, White Christmas and Matt Espy - pour forth in spades, opening large open spaces in the primal chemistry of the Dead Rider sound. Take the newest single, "Not A Point On A Scale", where a razor sharp guitar groove is exposed underneath Mr. Williams' fragmented and demented prose. The video, premiering over at Post-Trash today, flaunts the seething underbelly of Father Christmas (portrayed by Doug McCombs) during the off season, relieving himself from the immeasurable pressures that only a portly and joyous fictional figure could understand! Nihilism runs deep within Kris Kringle's blood and solely Dead Rider are here to soundtrack it.

Watch "Not A Point On A Scale" today, preorder Dead Rider Trio Featuring Mr. Paul Williams next, and prepare their upcoming tour and enjoy the catharsis that follows!