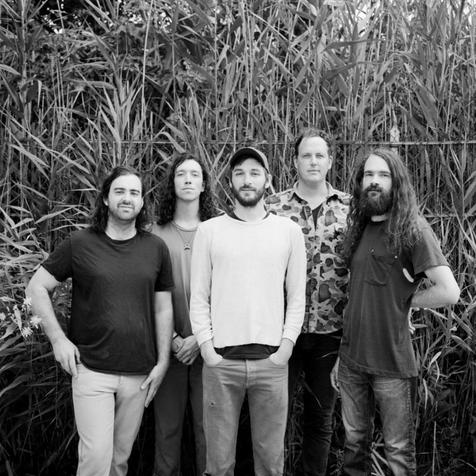 The CAVE rave has really livened up since we announced their new album, Allways, their first since the time-fractaling opus, Threace. Following that unbearable five-year hiatus, we're psyched to confirm that the quintet of Cooper Crain, Rex McMurry, Rob Frye, Dan Browning, and Jeremy Freeze hasn't missed a beat - in fact, CAVE have fearlessly dug down into their repetitive groove and emerged with a funk-flavored color we can't say we've ever really tasted before, but one that expands the palette well beyond what you've come to crave from CAVE. No better example from Allways exists than new single "Beaux", an illustrative example of just how purely the moods can came together in a single day of a CAVE recording session!

With Rex McMurry's percussion locked in to a new dimension of funk looseness (Bohannon vibes anyone?), setting the tone for shuffling riffs to settle in with each other, "Beaux" expands over the course of nearly ten minutes with such an easy attitude it'll make you wonder why the hell it can't go on for another hour! "Beaux" premiered last night on The Best Show with Tom Scharpling, and if you missed it, don't fret: you can listen back by simply clicking this link ( it starts at 2:45!), or over here at Bandcamp. Allways drops October 19th and their tour begins tomorrow, so prepare to get your groove going!