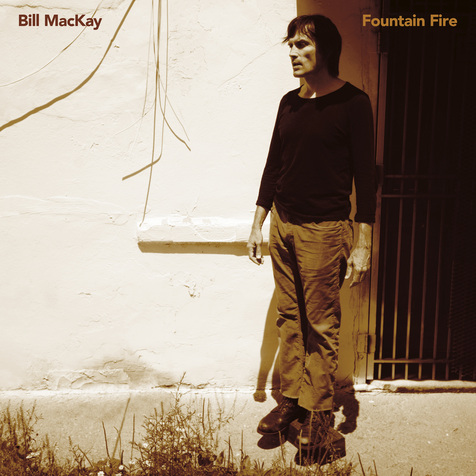 FIRE ON THE MOUNTAIN

Fountain Fire is Bill MacKay's second solo album on Drag City. The Chicago-based guitarist's continued sonic journeys in conversation with himself follow a travel-worn map written in his own hand. Bill has followed the trail from familiar confines to unknown places, catalyzing a style equally enamored with the traditional and the avant-garde to make his most expansive and forceful music to date.

You can hear it in the opening track; as the lava and lakes of "Pre-California" simmer to boiling, Bill assembles a bridge of guitars, layering beams of rumbling acoustic, distorted electric, and arcing slide parts. By leaping boldly from fixed points, he makes synergistic discoveries in mid-air. This is the MacKay writing style in its most evolved state thus far, following serpentine paths within the patterns, lunging in and out of tonality with instinctive flair and a stoic sense of inevitability, forging a sonic mosaic that breathes and grows organically as it fills the space of a song.

Bill's pieces are informed by meditation and memory, impressionistic as cinematic miniatures, inspired as much by film and literary passions as by sure-playing hands, and always rooted with deep soul and steady intention. As the pieces move in and out of focus in enticingly hallucinogenic fashion, Bill throws another element into play: a pair of stark and emotionally-charged vocal numbers that cause the hair to raise on the listener's neck, etched as they are with a haunting and eerie beauty.

Alongside the ever-shifting flows of instrumental color running through Fountain Fire, the songs shine blindingly, like mirages in the desert. Watching "Pre- California", directed & shot by Timothy Breen, the movement of Bill's songwriting is perfectly encapsulated by visuals; in the window we see california before California, before Califerne or Calida Fornax, the hot furnace in which matter and thought are free to unravel.  Watch the video below now and pre order your copy for March, 22nd here!