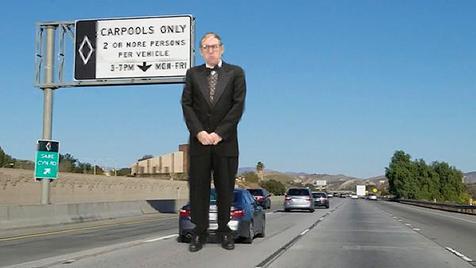 Parsley, sage, rosemary and thyme - great ingredients for any homemade meal and who knows, maybe even an album title? Once upon a thyme, you might reply, but the world of yesteryear still speaks a lot to "America's Funnyman", Neil Hamburger, which is why Neil's brand new video from his latest LP, Still Dwelling, is a USDA Choice cut from 1966 and one of Simon & Garfunkel's greatest hits, "Homeward Bound." Our only question is, why didn't anybody ever give it a country/western feel up until now? It sounds like a trucker anthem in Neil's hands, and furthermore, speaks his world-weary truth to the road that never ends that represents his career.

The vid looks like the greatest karaoke video your local dive bar has never seen, with Neil out on the road again, hitting up all of the best spots on good ol' Route 66 like a true American hero. Neil's a busy man-- clearly traveling across the whole U.S. of A just to shoot this video-- with a couple dates coming up with well-worn desert weirdos Meat Puppets next month and then two residences at London's Soho Theatre in June! With so much going on, expect Neil to be Still Dwelling for years to come!