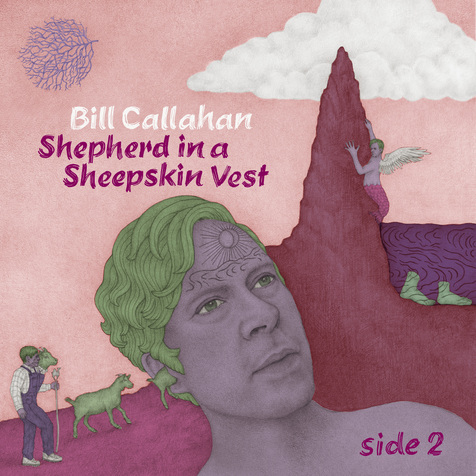 BILL CALLAHAN SLIPS IT IN SIDE TWO

As on Side 1, the mics open up into the moment preceding the music, letting our ears wander into the room seconds before the song starts. The light that was dappling on "Morning Is My Godmother" is seen from higher up at the top of the flip, as Bill gives us an airplane song in the grand tradition of Lightfoot and Denver, Chuck Berry and Steve Miller. "747" slips easily into cruising altitude, a staunch full band collaboration, while Bill wanders absently through yearning visions of selfhood before landing us on the moon, "like flies on a mule." The baby's head first appears here. "Watch Me Get Married" fills in the patchwork like we're flipping through a scrapbook. This particular marriage is to cosmic oneness (always the best bet to avoid the divorce courts) sounding like the swelling of true happiness, with the gentlest of oom-pah-pahs suggested in the backdrop. Throughout the side, the twinklings of the firmament are represented by instrumental comings and goings, adding shading and color on an almost line-by-line basis. Never one to dwell overlong on a sweet moment, Bill's attention turns to "Young Icarus", whose fate we thought we knew. Here, the story sounds similar to what Bill once wryly termed "the pornography of my past" or, even further back, the tale of "a teenaged Smog."

Odd details and signature changes trace this path, a synth flashing peripheral commentary as the old ways of "Ballad of the Hulk" are glimpsed in their death poses. The brevity of these melodies are a microcosm of the album; flowing moments of honey that turn, smoothly abrupt, into other sweet moments, leaving a track in the listener's mind that grows wider with time. Suddenly, dark clouds blow in. Like a flashback within a flashback, "Released" cracks and groans with mounting angst, a struggle in vacuous space, with Bill spitting out a sharp and disgusted "get fucked" as he silently watches the horsemen of the Apocalypse advance on their trail of corruption.

The acoustics palpably breathe: keyboards suddenly appear, hang translucent in the air, then wink out, and the stretching and crackling of skin acts as a part of the arrangement. At 2:22, this would be the shortest song on a Bill Callahan album, but on Shepherd In a Sheepskin Vest, it is one in a series of epic miniatures; small moments composed of even smaller moments, all fluidly sliding into the next. Bringing us to quintessential side-ender, and one of the barest moments on the album, "What Comes After Certainty." Over a guitar duet, Bill ruminates on love, lyrically revolving on a carousel that touches on his honeymoon and the dreams of his life and career, opining that they are not magic, but a part of unknowable destiny, and adding, "God's face on the water/though plain to see/still hard to read." When the honeymoon is over, this is what we're left with at best. And for anyone who's married well, it is very good.

Whooo! And that's just the first two steps. There's many more to come -