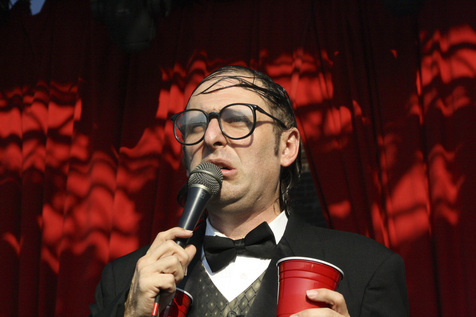 NEIL HAMBURGER PRIMED TO TAKE THE PISS RIGHT OUT OF U(K).

It's no wonder Soho Theater booked a long string of gigs for Neil Hamburger this month - laughter is always the best medicine, and given the will-they-won't-they state of things in Great Britain, London-types must be in need of a salve! But let's get serious - all jokes have some semblance of truth to them, and in case you missed it in the previous sentence, the important thing to notice is that Neil Hamburger is playing two back-to-back residencies at Soho Theater in London this month, with a gig in Manchester sandwiched between for good measure! Neil's latest LP happens to be his greatest - on Still Dwelling "America's Funnyman" sings again, exploring the highs and lows that life has to offer via a celeb-studded romp through classic songs of the past 50 years. Listen to yesteryear’s mainstream light pop culture unfurl beneath the underdog, resulting in even MORE classic entertainment! Everything oozes with orchestral arrangements, and nothing is safe from the ooze - from "Homeward Bound" to "The Straight Life" to "The Luckiest Man In The Room" to  "Crazy on You" - pick an era and a genre, Neil has you covered! Will these songs arise in person? It's up to you, dear reader, to find out - don't let this once a year occurrence slip you by, get your tickets to see Neil Hamburger in London and Manchester TODAY!