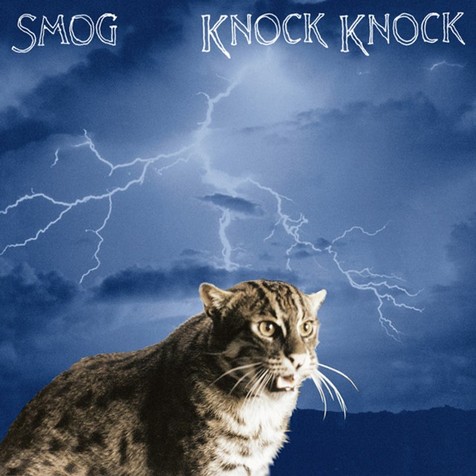 HALF SPEED KNOCK KNOCKIN' AT YOUR DOOR

After all these years, who’s there? Why, it’s Bill Callahan, the super-sexy solo singer, driving though the front of our house once again in his 90s vintage vehicle– the Smog-mobile! And what’s he got there in the passenger seat? Hey, it’s the 20th anniversary half-speed master vinyl edition of the Smog classic, Knock Knock, by (we’ve been over this) Smog!

Placing this LP on your turntable, you find yourself drawn ever-deeper into the sound – and it’s not just the eternally-stunning co-production from Bill and Jim O’Rourke, it’s the incredible focus brought by the half-speed mastering work done at Abbey Road, bringing out the highs, lows and yes, evenmids that OG fans of this album have taken for granted for too many years. The fresh fullness of the sound now stands as a tribute to the ol’ familiar Smog sensation of being somehow completely unfamiliar!

Knock Knock was enough of a tour de force that staging a re-look these twenty years later was a cool no-brainer. With production values at an all-time (for then) high and a team of Chicago-based studio rats (as well as a carefully vetted-and-compenstated singing children’s choir) on the case, Knock Knock was the most colorful of Smog albums; a record that played like a real-life opera, a story told in song.The story of a boy named Smog. Today, songs like “Held”, “River Guard”, and “Hit the Ground Running” are still called for at concerts. Meanwhile, the 20th anniversary half-speed remaster of the LP allows us to perceive the expansive spaces in tunes like “Sweet Treat” and “Left Only With Love”. Knock Knock just keeps on a-knockin’!

It wouldn’t have been the 90s without a CD version, and we’re re-releasing that in original, non-remastered form. Also, in tribute to where it all came from (but where it definitively wasn’t at the time), we’ve got a cassette version of Knock Knock, for the neo-lo-fi heads to appreciate! All of this (and no more) in stores September 20th - or preorder your copy direct, today!