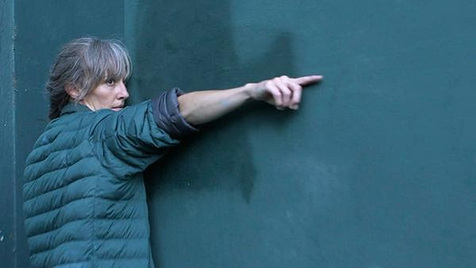 Summer 2020 keeps ragin' full on, and No Age keep firing on all cylinders. As our world descends into a perilous, unknown state, Dean and Randy have been channeling their live show energies into some extraordinary videos instead, wrapping as many Goons Be Gone (DC767) songs as possible with warm, comforting visuals, full of the action and color of the outside world - like deja vu, sunshine recollected from a dream. "Turned To String" is the latest case in point, with Jonn Herschend (who previously collaborated on Snares Like A Haircut's "Send Me" vid) interpreting No Age's trademark bounce as it spirals through rolling urgency and shoegazy introspection, implying the expansive dimensions to be found on the far side of neck-snappingly tight curves and sharp turns.

When asked about how the video came together, Director Herschend says:

"When Randy, Dean and I started talking about this video back in January, we initially had a much different and more ambitious plan. We were going to shoot with a crew down in Austin and in LA. But as with everything Covid related, we had to scrap it and went for simple, which turned out to be the right move. I asked Choreographer Kaite Faulkner to listen to the song and see what she might do. We then shot a series of sketches (just the two of us) around Alameda CA over a period of two months (staying 6 feet apart). Because it was just the two of us, it allowed us to vibe off the energy of the song, try things out and keep moving. I was able to let the camerawork fall apart and feel it's way through the song, syncing up with Randy and Dean via Katie's moves. "

Watch the video above and chase the goons away!