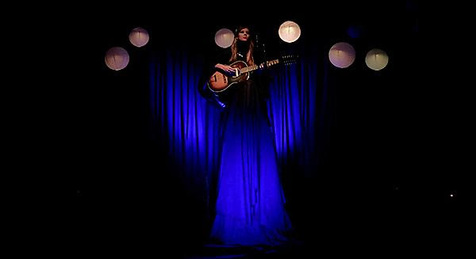 Reach out from your isolation! Reach for the sound of others. That's what Circuit des Yeux is asking of us. Until now, her sound world has been defined by relentless expansion. Reaching For Indigo and Reaching For Indigo : GAIA INFINITUS served notice: Haley Fohr is deploying her four-octave voice with an ever-emboldened focus into an epic landscape of music, desiring to travel ever further into a country of her own making.

In isolation, however, she has found herself reaching for the sound of others - and so, on October 31st, under a rare but fortuitous full blue moon, Circuit des Yeux will host a virtual show at Chicago's Constellation, made up of eight cover songs previously selected by friends and fans of her music. The goal - nothing less than transformation.

GET YOUR TICKET HERE

Without even putting a mask on, you can safely travel back out into the world with Circuit des Yeux, and bring the vibes of others back into the your own zone. This Halloween, dress up as nothing and prepare to be a citizen of the world again! Your ticket is available now.