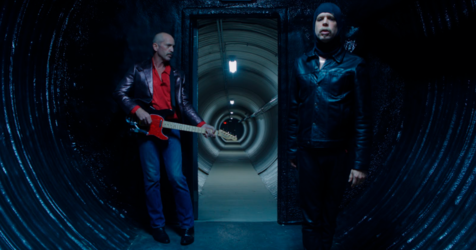 The bestial duo of the Superwolves: Matt Sweeney and Bonnie ‘Prince’ Billy reveal a video for “Make Worry For Me,” directed by Jonah Freeman and Justin Lowe and filmed at A Cell in The Smile, Freeman and Lowe’s architectonic sculpture.

Freeman and Lowe are renowned for immersive architectural exhibits that explore a subverted dystopian reality. Their installations have shown internationally for over a decade. A Cell in The Smile is a 5,000 square foot bunker that sits 27 feet underground in an undisclosed location outside of Cleveland, OH. It features a subterranean complex that houses a natural history museum, a lab for neuro-biological communication technology, a cold war think tank, a capsule hotel, a mosaic lounge dedicated to the practice of theoretical architecture, and a movie theater.

“As long-time fans of Matt Sweeney and Bonnie ‘Prince’ Billy, we invited the duo to perform in a nearby field in the summer of 2018. This is when we introduced them to our underground scene. From what we understand, they took a liking to the place and the next time we saw them was 18 months later when they played us ‘Make Worry for Me.’ Maybe they stayed underground for a while; maybe they made the bunker a temporary studio. It is hard to say for sure, but it was an epic song that embodied all the unreality and paranoia of A Cell in The Smile. We all agreed that we had to make a film for the song in the bunker and under less-than-ideal circumstances traveled back underground. It’s not clear how long production lasted; it seemed quick but when we reemerged the power was out in the nearby village and there were some other curious changes. We spent the first night above ground at a local inn in front of a fireplace waiting for electricity. The next day we split up, heading back to Kentucky, Texas and NYC respectively. This is a taste of what we captured of Superwolf at work in their habitat.” - Jonah Freeman and Justin Lowe

"The 18 months we spent in Freeman and Lowe's bunker felt like 18 years. It feels great to be out and to be able to share some of what we did during our internment. The first few drafts of the song and its accompanying visualization were full of anger and fear.  Finally we got around to owning it, and like good Stockhausen Syndrome sufferers, we now love Jonah Freeman and Justin Lowe and everything they do.” -Bonnie ‘Prince’ Billy