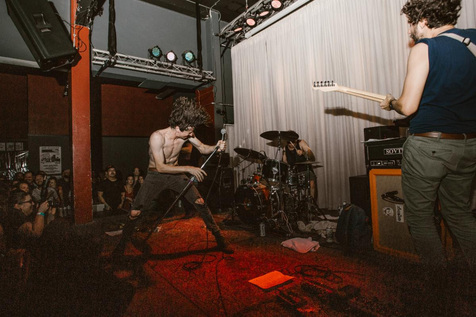 THIS IS THE END (the Dope Body concert movie TITLED "The End" - not the actual, literal end of anything, okay?)

Now that they're back, they're back to swinging in front of the charge! Dope Body's relentless rock futurism has reignited their catalog in the past year with not just one but two new releases, the LP-and-digital Crack a Light and it's digital-only predecessor, Home Body. With these releases, Dope Body has come all the way back around to their experimental genesis, while continuing to evolve the identity that they've been growing ever since.

In the past decade, the Dope boys have earned their reputation as a live powerhouse while thrashing around sweaty basements and other stinky dungeons across the USA and into Europe, spraying their unique performative DNA across every bar, house and backyard that asked for it - and even some that didn't! With touring on indefinite hiatus for the unknowable future, Dope Body have adapted and regrouped to present a full concert film now available to rent for less than the price of a Big Mac! Dope Body: The End is an undiluted show experience - the band, the fans, and the music played in its entirety without interviews or commentary. Footage was shot during their last live show as a band in Baltimore. With the future so uncertain, is this The End? Yeah, that's the name of the movie, but don't worry - Dope Body are just getting going again.

Purchase or rent the documentary and transport yourself to a Dope live show this weekend!