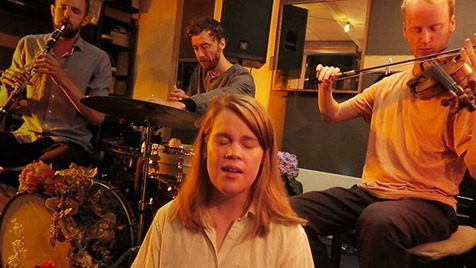 THE MIDNIGHT SUN IS ALWAYS RISING

Yes, the sun is setting - but a new day's already on the horizon, with the latest song from Alasdair Roberts og Völvur! Sung by Völvur’s saxophonist, Marthe Lea, this Norwegian spiritual is an ancient traditional melody, but the band's capacious sense of sound breaths fresh air through the centuries-old song.

Live on tape from their Norwegian homeland, Völvur's solo rendition of their arrangement of "Nu solen går ned" demonstrates their sympathy for the syncretic visions of Alasdair Roberts. It should be noted that Völvur also make music as the Marthe Lea Band - their astonishing new album, Asura, is out now - and the deeply integrated telepathy they possess informs everything they play, from folk tunes to modern composition to this remarkable group performance. With improvisation-derived faith in the moment, they essay the traditional as a pure 2021 hymnal; austere, intense, exploratory, perseverant.

Watch it above and listen to the album version on your DSP of choice when Alasdair Roberts og Völvur's The Old Fabled River drops on July 23rd.