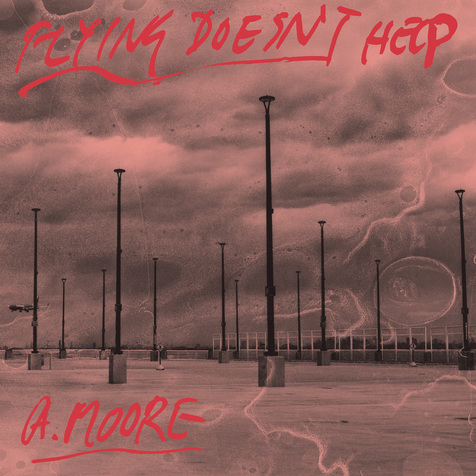 After spending the early years of the 1970s making experimental music first as a solo artist, then with Slapp Happy and Henry Cow, Anthony Moore's 1976’s OUT sessions had reinvigorated his youthful love of pop radio's naïve melodies, the undeniable rush of a song. England was roiled as violently as it had been in counter-cultural days a decade earlier; the UK pop charts breathlessly reflected this changing spectrum with a radically democratic view. This was an ideal environment for Anthony to explore, as he puts it, the “deep connection between minimalism, repetition, working with tape and celluloid and forming the modules of a three minute pop song.”

Building on the pop/experimental axis that distinguished OUT, and further informed by raw sensibilities exploding everywhere, Flying Doesn’t Help blasts out of the speakers with its own blend of sophistication and aggression. The first single, “Judy Get Down”, received Single of the Week honors from the NME (with review penned by a certain Brian Eno). It deserved it - three minutes and one second of pure pop perfection, 1979-style! This song has everything: hand claps, bass bombs, stereo-spread clouds of twinkling guitars and keyboards, special FX on the mixing desk, and sugar-sweet chorus backing vocals - the stuff hits are made of!

Rather than recreate the original release of Flying Doesn’t Help, this reissue instead embraces the changed environment of the current time and place: instead of no credits, now they are complete, with Anthony’s full name restored and the artwork subtly “relocated” to reflect new relationships. All of which brings the forward-looking sounds of Flying Doesn’t Help into the indie-informed 21st century syntax where it belongs. Listen to "Judy Get Down" and pre order FDH for June 10th!