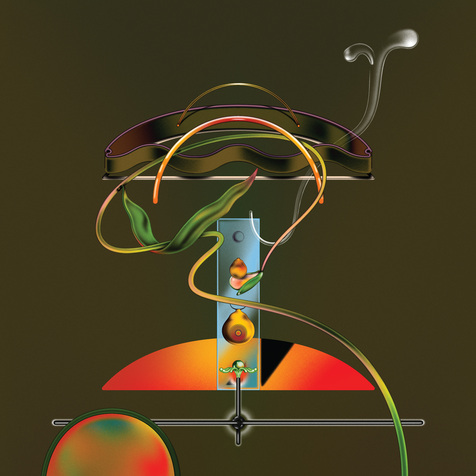 How d'ya get Spiders In the Rain? Start by going back to January 2020. Do you remember? Wand do. They’d been touring Laughing Matter for ten months. Seventy-nine shows! Everything that was involved — the miles that ran beneath them, the different places and people everywhere, the music as it breathed (making everyone change every night) — alchemized the band, and they drove deeper into their far horizon than they’d ever previously gone.

With Mike Kreibel and Zac Hernandez taping everything, they were able to not only squeeze the big-deck energy out of performances in S.F. and L.A., but also draw it out of the margins in Sacramento, Novato and Big Sur, where it all happened, also. Everyone everywhere brought their experience — the kids in the audience, the folks behind the boards and Wand.

Packaged sumptuously with artwork from Sam Klickner, Spiders In the Rain is a rainbow of natural beauty and man-made (therefore, corruptible) abstraction inside and out, arcing on an epic scale over four whole vinyl sides. Wand are orchestra and machine, at one with their audience, able to get inside any dimension of their sound, whether it be songs from their second album or their current one. They gave it all, and it almost felt okay that they couldn't play any more shows afterward (until it didn’t again). But the change was made: when they kickstarted live engines again in December of 2021, energy moved with the newfound fluidly through the room and the band. Evolution, achieved!

What will the future of records and shows bring? We'll find out, one night at a time. Spiders in The Rain will be descending October 28th, on LP and CD!