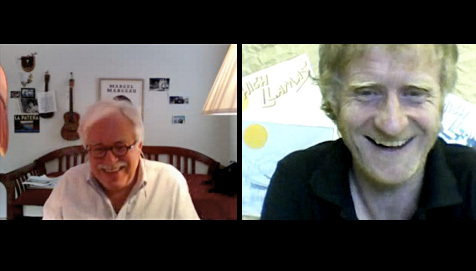 Good Lawd!! We can't believe it's been two-plus months since The High Llamas unleashed Talahomi Way - the latest greatest chapter in the pitch-perfect discography from Sean O'Hagan and his crew - but then, what is time, anyway? To celebrate the occasion of this record existing, an occasion which never ends, we approached the mighty, mercurial VAN DYKE PARKS to have a chat with old friend Sir O'Hagan. The resulting transatlantic git-down was EPIC - more epic than a stack of High Llamas and Van Dyke Parks records put together! So epic in fact, that we're going to split it up into three digestible entrees for all y'all punters. Not only do the maestros discuss the latest Llama opus (VDP: "a series of wonderful vignettes... for the ear!"), but they touch on such juicy subjects as the "psychedelic meat market" of late 60s San Francisco as well as VDP's legendary Discover America and Jump! records. Just off a UK Tour and full of stories to boot, Sean gets to swap anecdotes with one of his greatest heroes. Van Dyke is a master storyteller and here he reveals tales of working with Robert Altman, plus why he never worked with the Jefferson Airplane ("they were too high!"). And that's just the tip of the freakin' iceberg. So click it up and get your Skype on.