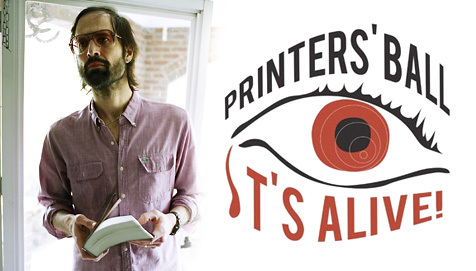 Mmmmm - it's a steamy Friday night in Chicagoland. Betcha got some plans that include cold beers and even colder rails of c'caine! Well - cancel 'em! We got something that'll knock you even stiffer than whatever contraband you're sitting on - the grand return of David Berman to the podium for his first public appearance for several years now! Since folding the tent on the much-beloved Silver Jews back in 2009, David's kept a fairly low profile, keeping public appearances to a minimum. Even though it's been twelve years since his volume of poems Actual Air was released, David's creative life has continued into unexpected diections, such as his book of cartoons, The Portable Feburary and the Menthol Mountains blog. However the good folks at The Printers Ball have enticed him out to read, which he'll be doing this evening! Get that tux out of mothballs ladies - we'll see you at Columbia College's Ludington Building, one block west of Michigan Avenue at 1104 South Wabash Avenue. He's reading at 8pm, that doesn't give you much time to get a seat! Hurry - but walk before you let us make you run. But hurry!