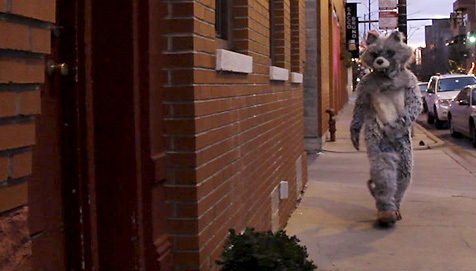 When we first listened to the newest record from Bonnie Prince Billy, we didn’t know the title of the album, but we heard a distinct voice stalking the players, making his violent presence known. And it’s not unusual for a Bonny record to channel a muse or, in the case of Wolfroy Goes to Town, create a character to carry the weight, but we never expected Wolfroy to be an actual entity! We begged the 'Prince' to let us see this roaming conspirator but the task would prove difficult. The Cairo Gang showed up at the DCHQ one day with seven digits scribbled underneath the phrase “page me” on a scrap of wood, soaked with the scent of iron-rich blood. We knew then we’d left Indian in the Cupboard territory and like Jodie Foster we moved closer to the glass. Page after page went unanswered for months until Bonny showed up in Chicago last week with an address and a time. Wolfroy wanted to meet, just in time for Thanksgiving. We don’t leave the ivory bunker, like ever, so we dispatched John Yingling and his camera with instructions to keep it rolling. The following clip is what we patched together from the hard drive removed from Yingling’s computer. If you are squeamish, or enjoyed a vegan Thanksgiving, be warned. Epically. Everything has its source, and its own perspective!