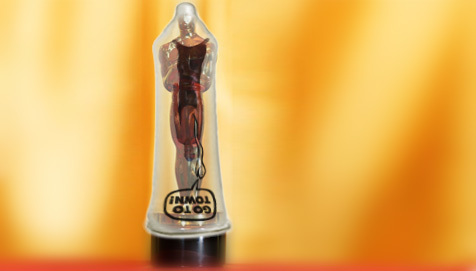 Hey, sex-brain! A mouthful of breast (or man-ass!) tastes so good with mitt full of thigh (or man-thigh!), doesn't it now? But when it comes to making it past third base and sliding deliriously into home, sweet loam, you better hop on the sex beat with Bonnie 'Prince' Billy, girly-man! You've heard about Wolfroy Goes To Town, stick your hand inside our secret sac and grab a Bonny Billy prophylactic so you too can go to town, SAFELY! Drag City freely encourages sexual adventure in every position you wanna be in; just keep your discharge to yourself, alright? Boys, don't have cum in her hair when your dick is hanging out - no diggity, you gotta bag it up with Bonnie! As if you needed another reason to line up early at your favorite Mom n' Pop LP shop this weekend -Bonnie 'Prince' Billy condoms are available for purchase exclusively at stores just in time for Record Store Day! When it comes to Record Store Day surprises, you sure can't beat a condom, with which to carry your most precious limited-edition Record Store Day "release."

What the hell else is up with our fine 'Prince' besides the Bondom? How bout this for news: Will Oldham has been nominated for an Italian Oscar!!! His collab with the cooly vampiric, Talking David Byrne as The Pieces of Shit has earned nominations for Best Original Song and Best Composers at this year's David di Donatello, the Italian Academy Awards. Oldham wrote the words, Byrne did up the musics for "If It Falls, It Falls," one of several The Pieces of Shit tracks in the film, This Must Be The Place, starring Sean "I Am Sam" Penn as an aging goth rocker. "If It Falls, It Falls" happens to be the Italiano favorito! Congratulazioni, Will! Buona Fortuna! That's a wrap, folks - just don't forget to wrap it up with your partner this weekend using a Bonnie 'Prince' Billy condom!