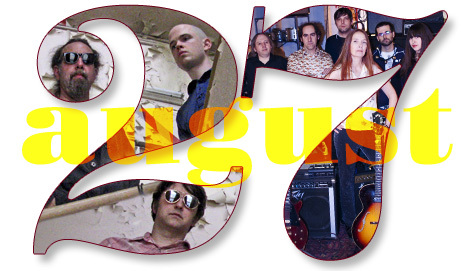 August 27th... today's date is not normally remembered for any particular reason. But if you look at the history of our country, and specifically that relating to the east coast, or even New York in particular, you'll notice something. There is something about this date that has been fairly monumental over the last century. Is it astrological? Does Mercury play in? We're not sure.

Look at these facts: on August 27th, 1958, the USA launched a nuclear test in the Atlantic Ocean (yeah mini-Cousteau, the ocean that touches New York City). A mere 7 years later, on August 27th 1965, The Beatles spent what was surely an explosive evening with Elvis Presley for the first ever time. Fast forward a few years, and on August 27th 1995 (just a couple years after most of you post-pubescent readers were born!) New York City suffered it's worst fire in nearly a century.

You may still be thinking coincidence. Well, we might agree if not for one oddity we're rather psyched about: August 27th 2010 happens to be the kick off date, in Brooklyn at Knitting Factory, for a mega tour, where the sonic bombast of Major Stars will collide with the kinetic thunder of Rangda, who headline their first North American trek! And with that, August 27 lands in the history books! All this convincing argument needs is a detonator -- go out and see em, kids!