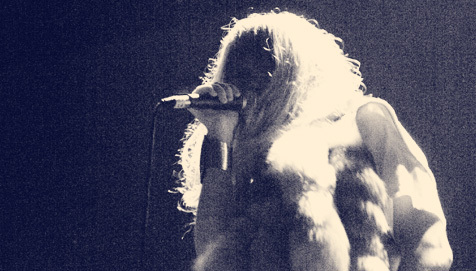 Keeping Up With The "Sway"ing Jennifer Herrema

Los Angeles, before you head to M Bar or whatever this Friday, head on over to the Volcom store on La Brea to check out legendary Drag City recording artist Jennifer Herrema as she jams with another singer of note: Wino, of metal monsters St. Vitus. The pair will be riffing on some classic Sticky Fingers-era Stones tunes.

Jennifer's been busy working on her full time gig as leader of RTX, slaving in the studio over tracks for a new album we've been promised for what seems like a light year in this day and age. Meanwhile, over the last couple years we've reissued the first four Royal Trux LPs (Twin Infinitives and the first Trux album on wax for the first fucking time since original press, way back in the day before you were born, kid)-- most recently handing you Cats and Dogs with deluxe packaging late in 2010. Do yourself a favor and "Sway" on over to the catalog page to dig it-- classic, early Herrema on prime display.