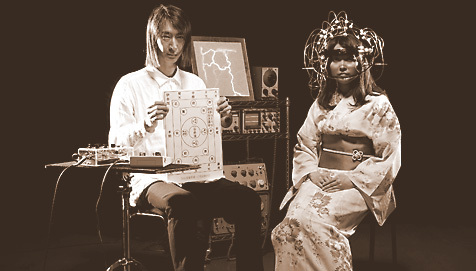 Relax, brainiacs — Brain Pulse Music is here! After years of researching the bioelectric functions of the human brain, combined with the traumatic aftershocks of Japan's Great East Earthquake, Masaki Batoh has emerged from his furthest incursion into the deep space and mystery of the human condition with an album meant to calm and aid in the healing of all around him. It has been Batoh's long-standing intention to create a machine that would interface with brain waves in a therapeutic way allowing the user to make adjustments to recognize and normalize brain wave levels. The machine he created, which functions similar to an effects pedal, does just that, creating sound from the Alpha and Theta waves generated from a vacant (meditating) mind. The BPM machine could prove effective in treating depression and anxiety disorder and has already been put to use with unstable and anxiety-ridden post-tsunami patients, a tool to reconcile the spirit and the body. Sound insane? Well it literally does at times, especially when tapped into a cluttered mind, but it's effect is actually sorta the opposite! For a taste of what's in store for you, as well as a glimpse into the BPM machine in practice, check the far-out-east preview video below.

All tracks on the Brain Pulse Music album are a prayer/requiem. Two pieces are composed of BPM machine recordings; the rest are rhythms and melodies commonly heard in religious rituals and provincial festivals using traditional Japanese instruments, rituals often used to appease gods thought to cause epidemics and disasters. Proceeds from sales of the Brain Pulse Music album go to disaster victims through Japan Red Cross. Masaki Batoh hits us with his purest trad-folk record to date on February 28, 2012 - get real vacant, and feel the effects of Brain Pulse Music!