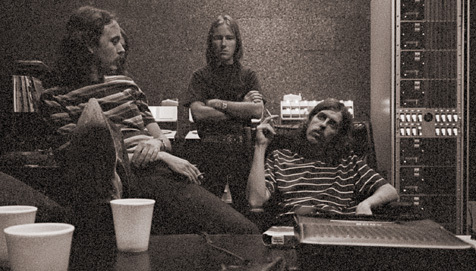 ARTIST PROOF IN THE PUDDING

With a brand new year upon us, we're giddy to the max - becuz it's possible 2013's new and re-ish'd releases will slay as hard- and steam with as much heat- as those we released in 2012! 'Man, last year was the shit, and the Lawd knows it'll be tough to beat; those releases were meant to rest lodged in your ear, forever playing, the last things you'd ever hear while the fire-waters of apocalypse engulf us all! Which of course, they didn't - and setting aside the question of, When Now?!?, you should simply consider yourself fortunate that non-believin' ol' Drag City had the foresight to create a back-up survival plan known as the 2013 release schedule. Now that we're all safe (at least til 2036, when Asteroid Apophis hurtles towards Earth) one thing's for sure: it's awesome feeling like all of 2013's releases might be as amazing as its first: Chis Darrow's Artist Proof!

Darrow was a member of LA's psych collective Kaliedoscope, and also played with The Nitty Gritty Dirt Band, Hoyt Axton and Leonard Cohen among MANY tall others, but by the time he started his solo career, he was notable as one of the few sketching out the country-rock decade to come for the California cowboys. As far as Drag City goes, Artist Proof is as rootsed-out as Corky's Debt to His Father (if not as avantly-framed); as mellow as Red Hash (if not as darkly stoned), as cosmically country as Spur (and genuinely west-coast to boot!); as previously-released as the Mickey Newbury albums and as much of a picker's delight as The Lost Takoma Sessions! This record hails back to the days when phrases like groovy, far out and too much all meant the same thing, and it was a good thing and there was no irony involved. On Artist Proof, Chris Darrow's America is inflected with the regional music dialects and the slow passing of time seems like such a blessing, and the tunes keep hitting deep. Artist Proof is a semi-lost classic that we're super-stoked to have in the catalog - make it part of yours on January 22, or pre-order from us today!