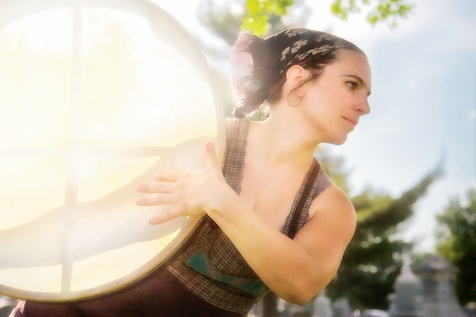 Hark, it's Faun Fables! Or rather - Honk, it's Faun Fables, back on the road after a long winter without their busking minstrelry on the highways and byways of the land. Having kids has slowed Dawn McCarthy and Nils Frkydahl down a step, and in addition to their lovely daughters, they both have other worthy musical projects (like Dawn's record with the Bonnie 'Prince', natch!) - but we feel, and we're not alone in this, a little less human without the supernatural conjuring that the music of Faun Fables performs upon us when witnessed in the live arena in the company of other like-minded souls. So, no, we don't need a new record as an excuse to spend some essential time in the presence of their spinning and song-telling, which is good, because the new songs they're playing haven't yet made it to "tape" (strange but true - these most medieval of our many troubadours have only recorded their songs on computers! Gaucelm Faidit and Bertrand de Born are rolling over in their unmarked graves!). Again, o people - the moment a song is sung is eternal, and so you don't want to miss the everlasting moments of music and love brought to you by the Faun Fables family coming up this May and June.

Just as spring will come, so begins thine f(a)un: