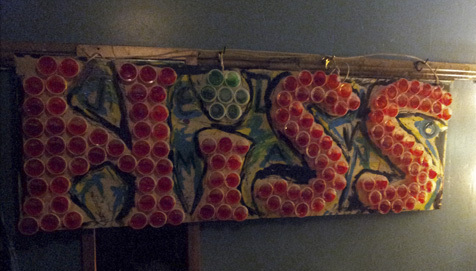 Whoa, nature! Nothing like inertia to help things grow; ever since the release of Water On Mars, the intensely fuzz-soaked banger of a full length album out just a month ago, Purling Hiss have annihlistically replicated the album at crushing volumes across the USA for jovial young rockers and old heads in each town they've visited, moving bodies with their waves of affirming sound, then chilling out afterwards and signing body parts they didn't previously know existed (yet obliging like the glad partiers they are) while offering beer to the ear-bludgeoned and hip-beaten, all the happier to hang with their own. The party's gotten wild and wooly, and the ground swell of Purling pride only seems to expand at every turn, long after the crunch of the last struck power chord and well beyond the steam of squealing feedback left in its wake.

Since the van broke down somewhere in the Midwest just the other day, these dudes decided, fuck it - driving sucks, why not fly somewhere? And if flying somewhere, why not fly somewhere off the continent? Lucky for the rock thugs in Europa, then - the Water On Mars long-pour touches down first in Prague, where the Hiss-ters better hang onto their jeans, before heaving itself all through the mainland and even up into the Kingdom, United. It's a heavy undertaking, but somebody's got to deliver the bruising sonics, pants or no. It's the Hiss' game to lose, are you ready to be their "Lolita?" Get down! Dig, it all begins May 4th!