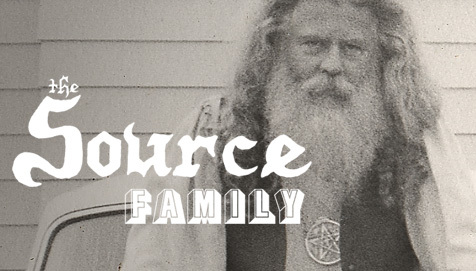 IT'S A-HAPPENING! THE SOURCE FAMILY PREMIERES WITH SPECIAL EVENTS NATIONWIDE!

Spring has sprung, and The Source Family naturally grows wild in the country! The Father Yod doc, about a peaceful hippie cult of spritual rock n' communal mayhem, healthy living, meditation and otherworldly practices all originating in a star-packed health-food restaurant in 1970s Hollywood, premieres at IFC Theater in New York beginning May 1st (get your tix here)! Leading up to it we've prepared nothing but Source Family mania for the coming weekend and for weeks into the future at premieres nationwide! Things get real with special Source dinners (authentic original recipes from The Source Restaurant!), Source Family appearances in nearly every city (Isis Aquarian, Electricity Aquarian! More!), originial Source Family music performances by a spiritually selected band of ultimate Yodheads, and spiritual workshops led by Source Family members! Plus Q&A with The Source Family directors, Jodi Wille and Maria Demopoulos. And by Yahowha, that's just for starters and just in New York! Your Source Family immersion weekend rolls out to the west coast, then beyond and back, with similar activities and faces in every premiering city!

Like, in truly Angelino fashion, The Source Family doesn't premiere in L.A. until May 9, but it does so out of doors, at The Standard! Based on the homefield locale, you're bound to get at least 40 original Source Family members, and of course, a group Star Exercise white magic ritual with the whole Fam in The Standard's parking lot. Ahh, just like the good ol' days! But with less Sacred Snow, probably... If we could stop there, we would - but The Source Family cannot be contained! Some 40 years since Father Yod left us for another plane, The Source Family continue to crowd our earthly host, extending itself in theaters across this nation organically, just like The Source itself. Check below for even greater detail, and a chance to join The Source Family in your town!

Directors appearing for Q&As in NY, SF, and LA

4/28 Dinner with The Source Family - Harlem

Dinner, music, and conversation in a converted church in Harlem

Food/show/party produced by The Roxie and Folk Yeah

Join The Source Family (for a night)!

Q&A with Directors Maria Demopoulos and Jodi Wille and Isis Aquarian, Electricity Aquarian and Galaxy Aquarian After party and musical performance at The Chapel

350-seat premiere outside on the pool deck of the Standard Hotel, just across the street from the original Source restaurant

About 40 original Source Family members will be in attendance

Party after the movie at the hotel featuring original Source Family music performed by Mira Bollette from White Magic, Steven McCarty formerly of Dead Meadow and others, with a special performance by Ann Magnuson

Special surprise appearances and Q&As throughout the week

The band Kahoutek with Brother JT

Source Family members Joshua and Summer will appear for Q&A

Artists in this story: Father Yod