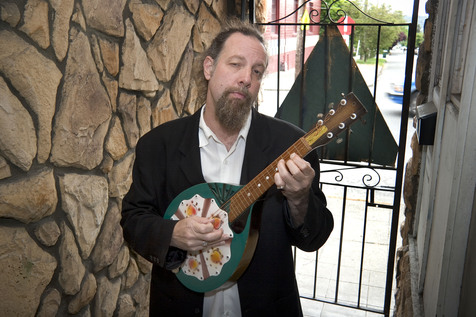 THE BISH IS BACK

....the Sir Richard Bish, that is. Yeah, he's been around the world just like you know he would, bending strings and expanding tonalities while living in Thailand and Morocco during the past year, following an extended residency in Geneva in the first part of 2013. But no matter where you are, time passes quickly, and this is the first time in four years that Sir Rick's playing in some of these United places. Yeah, there was probably some Rangda-ing going on in there between somewhere - but this is different, insofar as it's always gonna be kinda different ever time Sir Richard's around. He's basically back stateside to play the Transfigurations II Fest, wherein Asheville's esteemed Harvest Records invite artists who've meant the MOST in their lives to come down the country and play for the also-invited discerning minds, eyes and ears of everyone else. And they do, it's a good time, and hopefully we can see them either there or elsewhere. Under these circumstances, we can't ALL see ol' Bish rip it up solo-istically (and crack wise in between the all the neck-dancing) - but lucky duckies in Durham, Louisville, Chicago, Toronto, Montreal and Brooklyn can stand in and stand proud for the rest of the whole damn world. By the way, it's a small world after all - Tashi Dorji's opening the bill for Bish, is also playing solo - and what the hell, he's a Hermit Hut artist, working for label honcho Ben Chasny - not only a solo guitarist/ole-school Sun City Girls fan, but also a bandmate of Sir Richard. WHA?