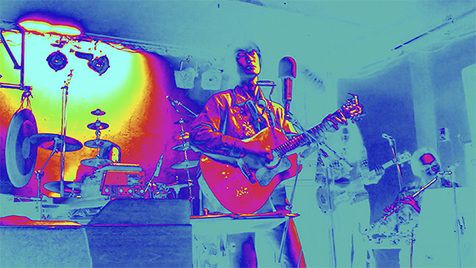 ALTER YOUR VISUAL MIND WITH THIS VIDEO FROM THE SILENCE!

Hey hey, my my, rock 'n roll can never die! And thanks to The Silence, it's alive and kickin' out the jams! Drawing deep into a collective musical soul that extends many eras into the past, The Silence fill your ears with an abundance of heavy rhythms and flowing melodies. It's a sound that transcends traditional psychedelic rock by providing a broad sonic pallet, one that's dusted with timeless elements. This soon-to-be-classic was masterfully produced with no digital interference; thus, analog instrumental colors leap from the tape like a dreamy panorama of thoughts passing through the mind.

It's one thing to talk about what an excellent, genre bending album this is, but entirely another trip to show it! As if on cue, The Silence, led by Masaki Batoh, have delivered an ephemeral, full-band performance video straight from the GOK studio in Japan which we simply can't keep to ourselves! Comprised of three songs, this album teaser is chock full of trippy visuals illuminating the sounds of "Lemon Iro No Cannabis," guiding the slow burn of "Black is the Colour of My True Love's Hair" and highlighting the frantic, explosive dimensions of "Pesach." The Silence's self-titled debut doesn't drop until March 24th, so take the opportunity to center yourself in anticipation by watching this enlightened video!

Japan! Alter your mind without failing a drug test, go see The Silence on tour: