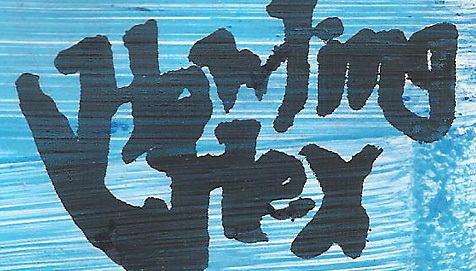 It's 2015, get to the dance floor: The Howling Hex got another new single ready! After last year's extended 10", "Fool's Watch" b/w "Lord Gloves," opened up wild frontiers in their songs and sounds, this new record is located - naturally! - at the other end of the spectrum. On both sides of the new "Butterfly" b/w "Party Shoes" 7" are compact pop songs with lyric hooks, vocal harmonies, guitar leads, crazy rhythms and themes of love and peace, mixed together into a beguilingly physical sound. As per the standards of the format, both songs compress all their virtue into classic two-and-a-half minutes flat - the perfect length for popular music in the days when rock and roll radio was the supreme voice of America's youth.

Of course, as any major Hexhead will tell you, this isn't your daddy's rock and roll radio! The vibrant rhythms of the ranchera, waltz and huapango on "Butterfly" b/w " Party Shoes" are voiced by The Howling Hex to create a totally new sound suitable for dancing by the mind and the body. Can you dig it? Just check out this trippy promo video courtesy of The Hex and you'll throwing your money at them!

That's not all the exciting Hex news in store; after a nearly 2-decades long hiatus, Neil Michael Hagerty returns to England for a couple of exclusive performances! The punters haven't seen anything like him since the last time he was there, banging it with Royal Trux, at the end of the last millennium! Then in May it's a return to the US Highways, tripping on the first major Neil Michael Hagerty tour in what feels like forevs.