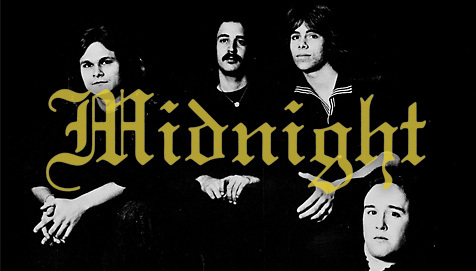 IT ALL STARTED AT MIDNIGHT

Attention all you crate digging, metalhead weirdos! If you're one of those types who spend every waking hour and every hard earned dollar searching for the next big discovery, boy do we have a treat for you! Midnight is one of those "shoulda/woulda/coulda"bands that might have actually made it - had their utter youthfulness not got in the way. Hailing from the 'burbs of Chicago, Dave Hill (vox, keys), Scott Marquart (drums), Frank Anastos (guitar, vox), and John Falstrom (bass) were all record-obsessed teenagers taking music lessons at a store called Melody Mart in Homewood, IL in 1974. That same year they formed Midnight, covering hot and heavy hard rock numbers from the likes of Uriah Heep, the James Gang and Sabbath - but they evolved quickly, playing house parties and high schools around the south suburbs in '75.

In the fall of 1977, despite having no management or producer, the kids recorded their LP Into the Night at A-K Sound Recording Studio in Orland Park, IL - privately releasing it in early 1978 in a small edition, making it a majorly sought-after hard rock rarity today. Distributed themselves (and barely promoted), the LP certainly covers all the heavy bases with a wickedly raw mix, at times sounding like proto-doomers Pentagram, but with an occasional boogie number and power-ballad as well. After the release of Into the Night, the band continued to play out, including a show at the Aragon in late '79. In 1980, the band chose to stop playing live and focus on writing new material - this insular existence led to the resignation of their irreplaceable powerhouse drummer Marquart. And with that, the clock struck Midnight on this promising young rock group.

Who knows what could have been when it comes to Midnight - and honestly, WHO CARES! All that matters, is for the first time the band's music will finally receive the recognition it deserves! Into the Night is the real legacy of Midnight and it's an exceptional vision of rawboned suburban kids taking new waves of rock under their wings and FLYING. Grab your copy on July 17th and dive Into The Night!

Artists in this story: Midnight