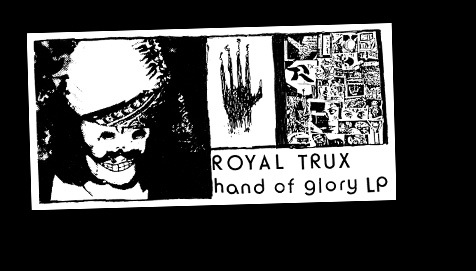 ROYAL TRUX GET HANDS ON WITH HAND OF GLORY

Royal Trux fans, rejoice-your sick fantasies have actually been true all these years! Royal Trux's Twin Infinitives dry run, Hand Of Glory, is being exhumed from the dim-n-dank crow's nest of DCHQ and is once again seeing the light of day! In these days of revitalized Trux fandom with reissues and reunion in the air, what could be more stim'latin' than a cache of dark age Royal Trux tapes? That's what's coming back - Hand of Glory is a missing piece of the Royal Trux puzzle, circa 1989-90.

Hand Of Glory was originally slated to be released following the seminal "Hero Zero"/"Love Is" 7" single (DC1, yo!). Hand of Glory is both bad-ass and half-arsed, upping the ante on what Royal Trux was capable of by doing LESS, somehow. For longer! With fewer people - therefore fewer people to pay. Newly relocated to San Francisco, Neil and Jennifer took advantage of their strange new climate by ignoring it, spending all their time indoors, pouring TONS of time and energy into this Trux direction. With black, white and blue magic ﬂoating around it, the Hand of Glory juju is dark and distinctly American, circa the end of the decade horribalis that was the 1980s (just kidding - the 90s were far worse!).

Sometime in 2000 or 2001, Neil Hagerty went to his parents' home to Virginia,where his father reminded him about a mysterious locked trunk in the basement. When Neil popped the lock on the trunk, he found the Hand of Glory tapes, stashed for around a decade there. "Domo des Burros" was complete and mixed but "The Boxing Story," was still on 4 or 5 little 1/4" reels. They were all supposed to be played on their own tape machines simultaneously! Luckily (or rather, intentionally), the boxes were marked and notated so he was able to piece them together and mix them down. First released in 2002 as the final nail in the Trux coffin, this essential, exo-stential collection of material will now be available once again in the confusion and desire that follows the Royal Trux reunion show at Berserktown in August. Reach for a Hand of Glory on August 28th, 2015!